An Uncommon Ally for Science

The Fourteenth Incarnation of the Living Buddha Teaches That Spirituality v. Science Isn’t an Either/or Question

Washington D.C., USA -- Globally renowned as an advocate for a peaceful coexistence between China and Tibet, the Dalai Lama is perhaps less well known for his advocacy for a different kind of peaceful coexistence: that between science and spirituality. 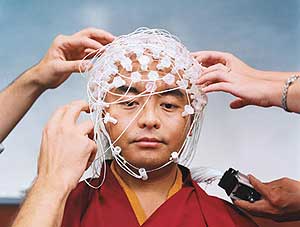 The Dalai Lama is a rare religious leader whose public zeal for science, research, and education serves as a positive example of the compatibility of science and spirituality.

This enthusiasm for science research was apparent at His Holiness’s July 9 talk for world peace on the West Lawn of the Capitol in Washington D.C. Referencing scientific studies about the effects of selfishness on heart disease, and of negative emotions on the immune system more broadly, the Dalai Lama used scientific evidence to support his artful advocacy for universal compassion and world peace.

Far from shunning science as a threat that disproves religious belief, the Dalai Lama has advocated for years that science and religion can be mutually enriching. Writing in 2003, the Dalai Lama said:

“Though Tibetans have valuable knowledge about the internal world, we have been materially backward partly because of a lack of scientific knowledge. Buddhist teachings stress the importance of understanding reality. Therefore, we should pay attention to what modern scientists have actually found through experiment and through measurement the things they have proved to be reality.”

Departing from his usual spiritual writings, the Dalai Lama even published a book about science and spirituality in 2006. The Universe in a Single Atom: The Convergence of Science and Spirituality discusses how science and religion can each promote the betterment of the other. On the one hand, since science can be used for either good or ill, it can benefit from religion’s ability help navigate the ethical space between. On the other, religion can avoid rigid fundamentalism by paying attention to advancing science. Together, he argues, they make a powerful combination that can help us better understand central questions of our humanity.

In the past, he’s used his spiritual authority to urge his followers to participate directly in scientific studies. Scientists had had little success studying the effects of meditation on the brain until the Dalai Lama dispatched monks experienced enough to meditate amidst the noise of an fMRI machine to participate in neuroscience studies abroad. The real-time images these studies provided have helped scientists better understand the actual ways that meditation influences brain activity. Another set of studies on the long-term effects of meditation has also showed a positive connection between the practice of meditation and brain tissue thickness.

In addition to using his spiritual authority to further science, the Dalai Lama has also exercised his political leadership to advocate for science education in society more broadly. He addressed the annual Society for Neuroscience meeting to champion a new cause: How moral leaders should work openly with scientists in order to keep up with the rapid progress of technical knowledge. As science speeds along gathering data behind common spiritually linked questions, the Dalai Lama asserts that religion should begin participating in the developing dialog.

“Today the question of science’s interface with wider humanity is no longer a matter of academic interest alone; this question must assume a sense of urgency for all those who are concerned about the fate of human existence. I feel, therefore, that a dialog between neuroscience and society could have profound benefits in that it may help deepen our basic understanding of what it means to be human.”

– Excerpt from article based on Society for Neuroscience talk.

The Dalai Lama’s enthusiastic embrace of interdisciplinary research has brought him in contact with tutors including quantum mechanics experts Carl von Weizsacker and David Bohm along with neuroscientists Robert Livingston and Francisco Varela. Imagine what benefits the United States would see in science policy if more of our political and religious leaders fostered such close educational mentorships with scientists.

Not only can meditation and spirituality aid our scientific understanding of human psychology, but science can augment the learning of the spiritual, according to the Dalai Lama. Since 2006 the Emory-Tibet Science Initiative has sent Tibetan monks to Emory University to take core science classes so that they can return to their monasteries in India and teach the basics to fellow monks and nuns. The partnership has also resulted in ongoing dialogue and collaboration between Tibetan monks and Emory science faculty, and has resulted in the translation of six science textbooks into Tibetan for the first time. Simple as it seems, the translation of science and mathematical teachings into Tibetan has brought down learning barriers between religion and science that have existed for centuries.

Images of a tranquil Buddha sitting placidly among nature couldn’t be more starkly juxtaposed with white lab coats practicing rigid sterile technique. But according to the Dalai Lama, these two fields - which evolved from, separate historical, intellectual and cultural roots - have grown to share basic philosophical methodologies. Both modern science and Buddhism share a deep suspicion of absolute notions and support ideas that organisms and the universe emerged as part of an evolutionary process.

Science continually renews itself by encouraging the questioning and correction of long-standing beliefs. Buddhism, he points out, does the same through a glorification of the investigation of reality that triumphs over even the most deeply venerated spiritual authority.

The Dalai Lama’s open-minded attitude toward science should serve as an example not just for other political leaders, but for people of faith everywhere. Religious studies are increasingly enriched by contemporary findings in science while technological progress continues to lead us toward unavoidable ethical questions. Science and religion therefore shouldn’t be seen as opposing forces, but rather the two-colored lenses of the 3-D glasses of reality. We need them both to see the full picture.

-------------
Elaine Sedenberg is a Science Policy Contract researcher at the Center for American Progress.