Ecstatic Altruism: The Secret Contemplative Art and Science of Tibet

San Francisco, CA (USA) -- As yoga goes mainstream and mindfulness and lovingkindness become household words, the convergence of timeless contemplative arts with current science and contemporary life may seem like yesterday's news. Yet there are still some Asian contemplative traditions as little known in the West as the mysteries of Shangrila portrayed in the film "Lost Horizons." 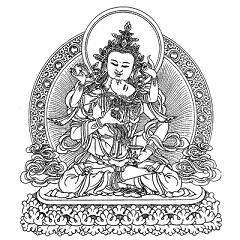 In fact, the secrets the film and book it is based on depict are not just the stuff of fiction, but rich ancient traditions preserved in the historic isolation of Tibet and hidden from the world until recently. These ancient traditions developed in North India at Nalanda, site of the world's first university, were preserved in the time-capsule of Tibetan civilization until their living masters were forced to flee the Chinese occupation with His Holiness the Dalai Lama in 1959. Of course, the unique Buddhism of Tibet is mysterious not just because it came onto the world stage centuries after the West had encountered the early Buddhism of South Asia and the Zen Buddhism of Japan. It is also a well-kept secret because it revolves around a system of esoteric contemplative arts and sciences, called Vajrayana Buddhism or Tantric Buddhism.

What makes the Tantric Buddhism of Tibet more mysterious than the Buddhist traditions that gave us mindfulness and lovingkindness? This simple question has at least three right answers, each of which takes us closer to the heart of the mystery. First and foremost, the teachings of Tantric Buddhism are safeguarded by a code of secrecy which is only unlocked for us in and through an intimate, confidential bond with a contemplative mentor of our choosing.

Among the many reasons for this, the best known is that the Tantras employ powerful, mind altering states which are most safely and effectively harnessed under the supervision of an experienced master. Less known but more crucial is the fact that the crucible and catalyst of Tantric Buddhism is the interpersonal art of role-modeling heroic altruism, an art which revolves around congenial, inspirational mentoring bonds.

Whether or not we've entered through the gateway of initiation which seals the mentoring bond, the second mystery of Tibetan Buddhism is hidden in plan sight, obvious for all to see. Unlike the classical simplicity of its sister traditions from South and East Asia, the Vajrayana tradition of Central Asia are embedded in a richly sensual and symbolic matrix of contemplative arts and ritual practices. Its archetypal god and goddess images, for instance, strike us as more overtly religious than the symbol-free, stoic philosophy of early Buddhism. Appearances aside, though, the imagery of the Tantras is less a system of religious symbols than a pragmatic technology of ideal life simulation, meant to help our imaginations role-model and rehearse having the altruistic genius and impact of a master, able to embody an enlightened altruist's heroic way of being in the world.

This brings us to the last and most essential feature of Tantric Buddhism: its reliance on euphoric and ecstatic states to help deepen and speed the work of meditative self-analysis and self-transformation. Here, we've entered a realm that seems utterly removed from the ascetic calm we think of as essential to meditation, Buddhist or not, a realm more akin to the otherworldly states of mystics like Saint Theresa of Avila or Saint John of the Cross. Yet the Tibetan take on these states is neither mystifying nor saintly but quite scientific and down-to-earth.

Akin to normal alterations of consciousness like dreamless sleep, orgasm or near-death states, meditation-induced flow states and natural highs can be harnessed to deepen and speed emotional healing and profound transformation. By disarming our minds and nervous systems and priming them for plasticity and learning, such states can empower us to break free of traumatic memories and stress reactions so we can fully realize radical open-mindedness and embody caring responsiveness. Once we've mastered this deep, transformational art, we're free to awaken our native genius for ecstatic openness and to fuel it with our natural spirits of euphoric altruism, gradually forging them into the inspired mind and nervous system of a master altruist.

While the exotic Buddhism of Tibet sees mindfulness and lovingkindness as the foundation of any contemplative life, it also preserves meditative power-tools expressly designed for contemplative life in a stress-driven world. Among these, the role-modeling arts and blissful neuroscience of the Tantras offer what may be the quickest, most effective way to bring contemplative clarity and pure passion to our demanding lifestyle. Given the right guidance and step-by-step system of practice, the ecstatic Buddhism of Tibet offers us an exceptional path of altruistic vision and inspired leadership that may well help us shift the balance of global consciousness toward lasting peace and sustainable happiness before its too late.