Ahead of hundreds of family members potentially descending on Perth to grieve, a Buddhist prayer ceremony was held at Fo Guang Shan Temple on Sunday for missing flight MH370.

Perth, Australia -- The anguished relatives of those on board the missing Malaysia Airlines flight are mostly thousands of miles from where the search for the wreckage is under way off the coast of Western Australia. 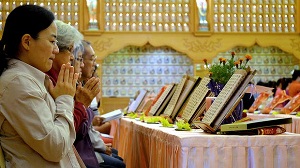 << Sombre: The Chinese Buddhist community in Perth held a special prayer ceremony for the missing passengers of flight MH370 and their relatives and friends. Photo: Amy McNeilage

But their sorrows were deeply felt by the Chinese community in Perth on Sunday, when a few moments were taken during an annual ceremony to honour ancestors to cast their thoughts across the oceans.

At the Fo Guang Shan Temple in Perth, prayers and blessings were offered to the missing passengers, as well as their grieving loved ones.

“We decided to add a special segment to our ceremony, where our devotees and visitors are able to offer a prayer to show their concern and demonstrate their compassion,” Grace Collins, a spokeswoman for the Buddhist temple, said.

The prayer, led by the Venerable Man Ko, asked that the sufferings of the victims were alleviated and that they were returned home safely.

They also asked that the families were blessed with strength so “the hurt in their body and mind may quickly transform from danger into peace”.

It was a significant day for the local Chinese, who were observing Qing Ming, when deceased relatives are honoured, often by visiting and cleaning the place where they rest.

Chinese across the world will participate in the annual tradition, also known as “tomb sweeping day”, over the coming week. For those still waiting to learn the fate of loved ones on flight MH370, the already sombre ceremony will be wrenching.

“Qing Ming is the time that you remember the dead – so if relatives have only just died, that adds to the sorrow," said Professor John Wong, a Chinese history expert from the University of Sydney. “It is a very emotional time.”

The fact that bodies have not been recovered does not necessarily hinder the practice but it does add to the trauma, particularly given there is cultural importance to having the body returned home.

“There is a term for this – and it means, to pay homage to them from a distance,” Professor Wong said. “I won't be surprised if some of the families of the passengers go to the seaside and burn some incense and paper to make some offerings.”

The West Australian Treasurer, Mike Nahan, who is also the Minister for Multicultural Interests, said the Chinese embassy had told the government to expect up to 600 family members to travel to Perth if the wreckage was recovered.

“It is very welcoming that members of the West Australian community have spontaneously offered their houses in assistance,” he said. “There are cultural issues of wanting to see the site – and the site, if it proves to be deep in the southern Indian Ocean, is a very inhospitable and hard to obtain site, but we will work through that.”