The Hague, Holland -- A 1,000-year old mummified monk hidden inside a statue of Buddha has revealed more of his secrets. 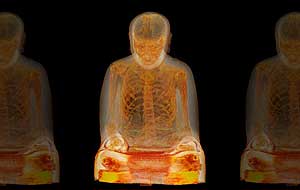 The Chinese statue, part of a joint exhibition between museums in Holland, Germany, Switzerland, and Hungary, is attracting plenty of attention after scientists performed a CT scan and endoscopy on the mummy inside.

After a seven-month exhibition at the Drents Museum in Assen, Holland, that ended in August 2014, experts decided to conduct a closer analysis of the hidden mummy.

“After the exhibition, we had some more questions about the inner part of this mummy,” Vincent van Vilsteren, curator of archaeology at the Drents Museum, told FoxNews.com.”

The statue’s owner, a private individual in Holland, is considering making a life-sized reconstruction of the mummy, according to van Vilsteren. “For that reason, we decided to do a 3D scan,” he said.

The owner bought the Buddha statue in 1996, unaware of its grisly contents. The mummy was discovered the following year while experts were restoring the statue.

In addition to the CT scan, which was performed at Meander Medical Center in Amersfoort, Holland, last year, scientists also performed an endoscopy, carefully inserting a small camera into the mummy.

“What we thought was lung tissue, was not lung tissue, but what seems to be the remains of little pieces of paper with Chinese writing on them inside the body,” van Vilsteren told FoxNews.com. “There are still some investigations going on, DNA research is going on,” he added.

The CT scan was the mummy’s second -- an earlier scan was performed at Mannheim University Hospital in Germany in Spring 2013.

The mummy is believed to be a Buddhist master of the Chinese Meditation School. The monk, named Liuquan, died around 1100 A.D.

Van Vilsteren told FoxNews.com that, while the mummy is around 1,000 years old, a 14th-century textile roll found beneath the body provides some key archaeological clues. “We think that the body was worshipped in a temple as a mummy and, only in the 14th century, was made into a statue,” he said.

The expert noted that the recent discovery of a 200-year-old monk’s corpse in Mongolia has fueled interest in the 1,000-year old mummified monk. The amazingly intact remains of the monk in lotus position were found in Mongolia’s Songinokhairkhan province, attracting huge media attention.

The Buddha statue will be on display at the Hungarian Natural History Museum in Budapest until early May, when it heads to Luxembourg.