Free treatment at temple in Vietnam has given a stage-four liver cancer patient - one whose cancer can spread rapidly - a good chance of making a full recovery, as son-in-law will tell a Hong Kong audience this month

Hong Kong, China -- Global spending on cancer treatment crossed the US$100 billion threshold for the first time last year, which was cause for celebration among pharmaceuticals companies. It was hardly good news for cancer sufferers though, as about eight million people still die from the disease every year, the World Health Organisation says. 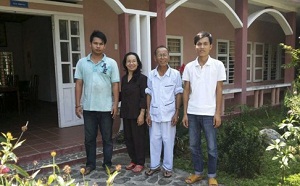 << Cancer patient Nguyen Bao An (second from right) with medical staff and volunteers.

In December, with the dollar figure close to its new milestone, Vietnamese retiree Nguyen Bao An was diagnosed with stage-four liver cancer and given three months to live. Almost 10 months after his fateful visit to the doctor, however, the 64-year-old former driver's health has improved considerably after receiving traditional treatment - absolutely free - at a Buddhist temple and clinic in rural Vietnam. The apparent cure has been traditional Vietnamese medicines, a vegan diet, and spiritual teachings to soothe his mind, says Hongkonger Paul Tarrant, Nguyen's son-in-law.

Nguyen's tumours have reduced in size to the point where he has a good chance of making a full recovery, says Tarrant, who, with his wife and two daughters, is a Buddhist.

Stage four is the most advanced at which the disease is diagnosed, when cancer cells are in the bloodstream and can spread to any part of the body. It's often a death sentence, and the diagnosis only adds to the patient's suffering.

However, Nguyen was not told during his first hospital visit that he had advanced liver cancer. The doctor informed his daughters, allowing the family to break it to him in their own time.

"In Vietnam, doctors don't tell the sick person about their condition, nor do they force a programme on someone. Family take care of them," Tarrant says.

Nguyen was cared for at home in the coastal city of Danang by Tarrant's wife Duyen and her twin sister Trang. Tarrant and Duyen are co-founders of two Karma Waters vegan restaurants and a responsible tourism company in the city. Tarrant says Nguyen was persuaded by his daughters to switch to a simple vegan diet or red rice and sesame seeds, supplemented by medicinal water from boiled lingzhi mushrooms, a drink of water and white turmeric powder, and a liver medicinal tea. He was also encouraged to listen to recordings of Buddhist chants and read scripture.

Eight weeks later, the doctor was amazed to find that, instead of being on his deathbed, Nguyen's largest tumour had grown only marginally, and 30 smaller tumours remained the same size, Tarrant says.

Given the relatively hopeful prognosis, Nguyen's daughters felt it was the right time to gently break the news to their father about his condition. He was naturally upset, Tarrant says, but he did not give up hope, and agreed with his daughters' suggestion to move into the treatment centre.

"As the person begins to realise what is going on, if they really want to live, then they are given realistic baby steps to achieve it. The wide community support is there from fellow Buddhists. It's not about money," Tarrant says.

Nha Dieu Duong Tinh Thuong Suoi Hoa, a "spiritual nursing" centre that has no English signs, is in Vietnam's Central Highlands, about an hour's drive from Danang. Treatment is free for all, although donations are accepted. Such centres are not uncommon across Vietnam and other Southeast Asian countries with Buddhist populations, Tarrant notes.

"The temple is a charity supported by a wide Buddhist community, including the landowner who donated the land, a private university that provides most of the funding, and volunteers," Tarrant says. "In the past two years, about 40 patients have been cured of different cancers. Patients stay at the temple and volunteer their services. It is run by a monk, and part-time doctors work there."

Upon arriving at the centre, Nguyen made a vow to the head monk he would remain a vegan for the rest of his life. His treatment began with a seven-day fast, after which he stuck to his new diet, with ginseng added. Six weeks later, Nguyen returned to the doctor, who found his large tumour had shrunk from its original size of 95mm to 82mm. The smaller tumours had vanished.

Much research has found that there are fewer cases of cancer among vegetarians and vegans, although scientific findings are inconclusive. Environmental, lifestyle and numerous other factors also have to be taken into account.

According to the US National Cancer Institute, studies show as many as 80 per cent of cases are due to identifiable factors, so are preventable. Thirty per cent are due to smoking, while between 35 to 50 per cent are linked to diet.
The question is not whether we can beat cancer to either succeed or fail
Paul Tarrant

The institute says there are relatively fewer cancer cases in countries where diets are predominantly plant-based, meaning high in fibre - which is not found in animal products, is harder to digest, and passes through the system quicker. Such reactions can occur in other parts of the body, and cancer cells can spread through the bloodstream, the institute says.

By far the largest study on the subject, detailed in the book The China Study, was conducted in China in the early 1980s, led by US researcher Dr T. Colin Campbell. (He had been inspired by data suggesting it was possible to kill cancer by starving it of protein.) Researchers examined medical data of 880 million Chinese citizens, derived from the China Health and Nutrition Survey initiated in the '70s by premier Zhou Enlai. Zhou later died from bladder cancer.

Campbell layered the data over a map of China and discovered most cancer cases were found predominantly in cities, while in many rural areas the disease was almost non-existent. In the early '80s, Campbell and Chinese academic Chen Junshi furthered the research by studying data of 6,500 people from 65 rural and semi-rural areas, and found relatively fewer cases of cancer where people existed largely on a whole-food, plant-based diet.

Decades later, the world seems to be no closer to finding a cure for the disease. US wellness professional and best-selling author Dr Joseph Mercola, who advocates dietary cancer prevention measures, believes corporate self-interest stands in the way of a cancer-free world. In an article on his website, titled "Why medicine won't allow cancer to be cured", Mercola claims the "war on cancer" is a farce perpetrated by the pharmaceutical giants. Virtually nothing is being spent by big pharma on effective prevention strategies or cures - merely expensive treatment such as chemotherapy drugs, radiotherapy, and diagnostic procedures and surgeries, he says in the article.

"The typical cancer patient spends US$50,000 fighting the disease. Chemotherapy drugs are among the most expensive of all treatments, many ranging from US$3,000 to US$7,000 for a one-month supply."

The US-based IMS Institute for Healthcare Informatics reported in May that global spending on cancer treatment topped US$100 billion in 2014. Without factoring in inflation, there had been a compound annual growth rate of 6.5 per cent over five years.

For Nguyen, and others residing in Buddhist clinics around Southeast Asia, all the dollars and all the research in the world are irrelevant. Their reason for adhering to a plant-based diet is driven by entirely different fundamentals - faith. While scientists and Buddhists may agree the root of cancer lies in cause and effect, scientists take a biological approach, while Buddhists view it from the perspective of karma.

"To Buddhists, bad health equates to spiritual problems," Tarrant says. "Karma is the principle of causality, where intent and actions of an individual influence their future."

Buddhists believe cancer is largely the negative energy of karma consuming sufferers. This energy stems from greed, anger and stupidity, which includes eating the bodies of other creatures. Positive energy comes from compassion and other qualities, he says.

"The question is not whether we can beat cancer to either succeed or fail. The question is can we awaken and clean our karma to zero and finish our spiritual journey in this life. If not, we have to come back and try yet again."

Tarrant believes coupled with a spiritual path, the vegan diet improves health and longevity. He will be a guest speaker for support group CanSurvive, part of the Hong Kong Cancer Fund, at a talk on October 14 at the Kowloon Cricket Club (tel: 9045 9807).

On October 21, he will also be involved in the VegFest, a large vegan festival, at the Adventist College in Clearwater Bay.

His father-in-law is now well on the road to recovery, Tarrant says. Nguyen spends his time at the temple chopping wood, preparing herbal medicines, reading and meditating.

"He and his family understand he can survive cancer if he wants to. His mood is very upbeat. He has moved to live full time in the temple so it is just a question of how long he will live and how much of his karma in this life he can clean up before he dies."