Monk leads the battle against AIDS in Yunnan

Shanghai, China -- ABBOT Long Zhuang talks about the Five Precepts of Buddhism every day. But he talks most about number five: Do not take drugs or drink alcohol. 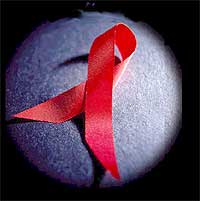 "One lust leads to multiple lusts," says Long, who has been involved in HIV/AIDS education and prevention programs since 1997. "Once people lose control of alcohol intake, it can lead to unsafe behavior such as murder, theft and drug use. That's why the Five Precepts is important in AIDS education," he adds.

Not far from the border of the Golden Triangle — the world's largest production base for drugs — with Myanmar, the Xishuangbanna Temple in the small southwestern city of Jinhong, Yunnan Province, offers a caring venue for HIV-infected people to meet and talk with monks. More than one third of the 860,000 residents of the Xishuangbanna Dai Autonomous Prefecture follow Buddhism.

The Home of Buddhist Light was founded in 2003 through a project sponsored by the United Nations Children's Fund (UNICEF).

Four red characters are emblazoned across one wall inside a 15-square meter meeting room. The characters read benevolence, compassion, delight and sacrifice.

Sitting next door to the Golden Triangle, needle sharing accounts for the majority of HIV/AIDS cases, but sexual transmission rates are also rising.

As the first volunteer at the Buddhist Light, Li Fang admits she was afraid to talk to people initially. "I was afraid they would know I was HIV-infected and look down on me. But the monks and staff here persuaded me to stand up before others," Li said.

After losing her husband to AIDS, Li, 37, was at first shunned by relatives and friends. She considered suicide, but a sense of duty towards her junior high-school son kept her motivated to stay alive. She now earns 300 yuan (US$24) a month as a volunteer at the home.

"I talk with other HIV-infected people about how to face the epidemic and how to communicate with family and friends about this."

Xiao Qing, 31, was diagnosed HIV-positive after giving birth to her son in April 2004. She and her husband were kicked out of his parents' home. Her brother and sister have not seen them since. Her husband, unlike their son, is not infected and still lives with them. But not only does he abuse Xiao, he also uses alcohol to disinfect his son before holding him.

"When I first arrived, I realized I still had a chance to live my life," says Xiao. "My biggest problem was my family's prejudice. But when my family heard the monks helped me, they changed their attitude a little. I'm more hopeful about the future. I'd like to see my son grow up healthy and happy."

In a broader sense, the Home of Buddhist Light seeks to unite people of all ages and situations to develop awareness of and compassion for others in the ongoing campaign against AIDS. Abbot, a title given to a superior of a monastery, Long and other monks hope their message of tolerance will reach all age groups.

Meanwhile at the temple, Long and other senior monks give classes on AIDS knowledge to junior monks once every two or three months. They talk about how the virus is transmitted, and more importantly, not transmitted.

Seventeen-year-old Yan Longwan has just won an alarm clock, a towel and toothpaste as first prize in an AIDS knowledge test.

"I was a bit uneasy when we first discussed AIDS," he says. "But helping others is what a monk should do."