By Jeff Diamant and Maura McDermott, The Mercury News, October 31, 2005

PISCATAWAY, N.J. (USA) -- Sharing the spiritual lessons that have become his calling card, the Dalai Lama drew the largest crowd for a non-athletic event in Rutgers University history last month with a wide-ranging speech on what he called the ``science of emotions.'' 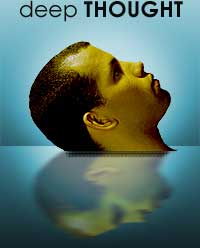 From a massive stage in the Rutgers Stadium, the spiritual leader of Tibetan Buddhism -- who speaks Friday at Stanford Memorial Church during a two-day visit to the university -- focused on inner peace and world peace and the connection between them.

With occasional help from a translator, the man regarded as the 14th incarnation of the Buddha of Compassion joked with the crowd of nearly 36,000 and answered questions on morality submitted earlier via e-mail.

At Stanford, tickets are already gone for the three public events involving the Dalai Lama, but the Memorial Church presentation (2:30-4:30 p.m. Friday) and the other programs will be broadcast live on the university station, KZSU-FM (90.1), and also Webcast via the Internet (check http://dalailama.stanford.edu for details, which were not available before publication).

The Rutgers turnout -- people began arriving hours before the speech -- exemplified the popularity of the 1989 Nobel Peace Prize winner among Christians, Hindus, Muslims and Jews. Little in the speech was specific to Buddhism, and the Dalai Lama urged listeners to think of his message not as religious but rather as ``a science of emotions, the science of mind.''

The chief themes in the talk, titled ``Peace, War and Reconciliation,'' were the importance of being compassionate and of controlling negative emotions, because doing so helps improve the world. Compassion, he said, drives peace, and true compassion ``is not just a mere feeling'' of pity but a sense of concern for others that stems from feelings of equality with them. That feeling, he said, contributes to an ``inner disarmament'' that can help people get along and eventually lead to world peace. Negative emotions such as anger and hatred, he said, can cloud one's vision and judgment.

The Dalai Lama, known as ``His Holiness'' to followers, made his points with stories of two Tibetan Buddhist monks. The first monk, he said, had spent nearly 20 years in a Chinese prison and when released to speak with the Dalai Lama in the 1980s, told the spiritual leader he had been in danger on a ``few occasions.'' Asked to elaborate, the monk responded that he had been in danger of losing compassion for the Chinese: ``He considered forgetting compassion as very serious and dangerous,'' the Dalai Lama said.

The second monk, by contrast, was so angry at Chinese rulers for their actions in Tibet that ``his face became red'' when talking about them. ``This kind of hatred brings more suffering to yourself,'' the Dalai Lama said.

It was a message that held special significance for people in the crowd such as Lara Brewche, who was paralyzed from the waist down in a car accident at age 16. ``I knew enough to let the anger go, and I made a wonderful life for myself,'' said Brewche, 34, who grew up Roman Catholic and embraced Buddhism a year ago.

Urging Americans to help narrow the worldwide gap between rich and poor, the Dalai Lama asked his young listeners to grow into adults willing to help people outside U.S. borders. ``You must look from wider perspective, not just talk America, America, America, like that.''

He also made the crowd laugh repeatedly. Overall, the Dalai Lama was a hit.

``You felt you were talking to a friend and listening to a friend,'' said Rajul Shah, 58. ``What he preached here wasn't religion; it was very spiritual.''