Tibetan medicine practitioners strongly suggest in the belief in selflessness. 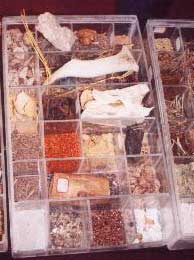 << A sample of Tibetan dried medicine

His Holiness the Dalai Lama said: “Like the traditional Indian and Chinese systems, Tibetan Medicine views health as a question of balance. A variety of circumstances such as lifestyle, diet, and seasonal and mental conditions can disturb this natural balance, which gives rise to different kinds of disorders.

Tibetan Medicine is deeply influenced by Buddhist practice and theory that stresses the indivisible interdependence of mind, body and vitality.”

Tibetan Medicine states that ignorance gives rise to three main mental afflictions-attachments (I call this because it is stronger than mere desire, meaning clinging on a beautiful object), hatred and delusion. These mental afflictions gives rise to rLung, mKhrispa and Badkan disorder are mere causes that do not produce illnesses unless met with four factors relating to: change of time (season), attack of evil spirits, wrong diet and behavior. Tibetan medical text explains that there are four types of remedies for our illnesses, which are correct diet, lifestyle, medicine and minor surgery. These remedies are adopted either to prevent illnesses or heal disorders. In the behavior chapter of Tibetan medical texts, three sections are explained: daily behavior, lifestyle according to change of seasons (summer, winter, autumn, spring etc) and occasional behavior.

One should always mindfully avoid the two main contributing factors of a unwholesome diet and behavior. One should refrain from excessive physical movement, verbal speech and mental thought; and moderate the use of these actions. Never misuse one’s senses (eyes, nose, ears, tongue & body). Sensory misuse includes not using at all, wrong usage, excessive usage or using to full pleasures.

Properly check before sitting anywhere and learn in advance about the path on which you intend to take the journey. Live in a secure place and avoid wandering or moving around at night. If necessary, wear shoes, take sticks and only proceed with faithful friends. These measures will overcome possible attack by thieves, animals and will ensure the safety of sensory organs. Take sufficient sleep at night. Improper sleep develops roughness in the body, which disturbs the body ad gives rise to rLung disorder. It causes variable bodymind discomfort.

If one misses a night’s sleep due to work or other factors, one should remain hungry the next morning (this helps to balance the Badkan energy) and sleep half the actual period of a night’s sleep (4hrs of sleep if you normally sleep for 8hrs in the night).

Due to roughness created by shorter nights in the early summer, the body loses its strength and complexion and has an increase in rLung. In such cases, one should sleep a little in the afternoon. Those who are alcoholic, physically weak and tired, mentally grieved, verbally exhausted, aged and easily frightened should also sleep a little in the daytime. This cures rLung imbalances, improves strength, oiliness and heaviness in the body. Other than the above cited conditions (those are alcoholic, physically weakened etc), sleeping in the daytime (afternoon) develops excessive Badkan, causes swelling, mental obscurity, headache, lethargy, common cold and epidemic/contagious diseases.

If one sleeps heavily, one should reduce Badkan (which is the cause of oversleeping) by application of emetics, fasting and enjoying the company of women (also by indulging in sexual intercourse). If one suffers from sleeplessness, one should drink (warm) milk, curd, Tibetan wine (Chang), meat soup etc. (which is warm and nutritious in potency) and apply sesame oil on the head and pour a little drops of warm oil in the ears.

Those who are sexually active should avoid sexual intercourse with: Non-humans (such as animals), woman/girl friends of others, ugly woman/girl, pregnant woman, woman/girl of a very weak body, pained by illness and distress and woman/girl having her menses (it reduces strength and complexion, causes hurdles to one’s life and other variety of sufferings).

The body strength and sperms develop rapidly in winter and one can indulge in excessive sexual pleasures with woman/girl. The body strength in autumn and spring is medium so one should indulge in sex after every two days. During the rainy season and in early summer, one should indulge in sex after every fifteen days. If one engages in sex other than the days recommended, one will suffer from unclear perception of sensory organs, dizziness and other unbearable illnesses that causes uncertain demise. One should thus remember the consequence of untimely sex and avoid it accordingly.

Regular application of oil (massage) on the body yields numerous benefits such as:

One should occasionally apply oil on the head, palm of the hands and soles of the feet with sesame oil and put seed oil (mustard oil) in the ears.Proper physical exercise reduces excess fats; gives magnificent look and specifically develop digestive heat (this is responsible for proper digestion of our food). It also strengthens, stabilizes and toughens the body. Excessive exercise leads to improper condition of the body. Aged people who suffer from rLung and mKhrispa disorder or both must avoid such unwholesome life styles. Strong and Badkan people and those who eat oily foods should exercise in the winter and spring.

Rub the body with flour of pulses (like dal- lentils) after a massage or mild exercise. This alleviates Badkan, helps in digesting fats, clears complexion of skin, stabilizes and softens the limbs.

Take frequent baths with hot and cold water. Bathing with flowing cold water in August (autumn) boosts sexual energy, strength and maintains the internal-external heat of the body. It also lengthens life span, clears complexion and is a good remedy against itching, foul smell (due to sweat), and lethargy, thirst and excess body heat. Avoid washing your head with warm (also hot) water as it weakens the complexion of the hair and eyes, and causes hair loss and impaired vision. It also causes diarrhea due to fever, distension of stomach, common cold, indigestion, nasal and eye disorder. You should also avoid washing your head and body with extremely warm water immediately after meals.