ATLANTA, Georgia (USA) -- When she needs a break from her day as a city council aide, Theressa Hamilton retreats to a garden oasis on the roof of City Hall. 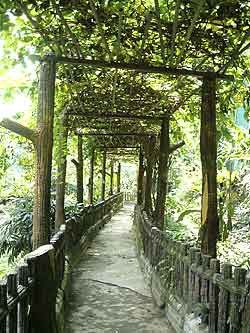 There, among the cement, steel and glass, Hamilton smiles at an orange butterfly alit on a green bush with pink flowers. The practicing Buddhist says she uses the garden often to chant.

"Even though it's downtown, it's not very noisy, and it's relaxing. I'm able to digest my food better when I'm sitting out here," Hamilton says, adding that she tries to escape to her verdant rooftop for at least 15 minutes each day.

City Hall's "green roof" is one of dozens of projects in Atlanta that are part of the "building green" movement that proponents hope will take root in cities across the country. The city's progress attracted the U.S. Green Building Council to hold its annual Greenbuild Conference here.

Supporters say the concept of building green has recently gained momentum because of increased concerns about rising energy costs and the creation of a standardized system that certifies buildings as environmentally responsible.

Janet Faust, a horticulturist with JDR Enterprises which specializes in green roofs, said demand for the building feature has increased in the past year among companies concerned about energy costs. In downtown Atlanta, the temperature is 10 degrees warmer than in other parts of the metro area, she said. Green roofs reduce the island effect and add to thermal insulation of buildings.

Green buildings use 30 percent less energy than traditional buildings with methods such as incorporating insulation and windows that help with heating and cooling, said Rick Fedrizzi, president of the U.S. Green Building Council.

Even the direction that a building is facing can make an impact, he added. For example, a building with most of its windows facing south will have higher cooling costs because of its increased sun exposure.

"A lot of times people just don't think," Fedrizzi said. "Then you get poor design."

The environmentally-responsible buildings also emphasize ventilation, water conservation, and the use of non-toxic paint and recycled materials like carpet.

Builders, designers and others concerned about the environment are partnering on projects. Nationwide, 345 buildings have been certified using the council's Leadership in Energy and Environmental Design (LEED) standards, and 2,400 more have applied for approval, including more than 50 in Atlanta.

"We want to contribute to our environment through our architecture," Calderon said. "It's not really more expensive, but if it is a little, it gives you so much in return that it's absolutely worth it."