Chicago, USA -- Mental toughness in an athlete isn't something that's easy to define. But one path to achieving that goal is through meditation. Just ask Kelly Lehmann. 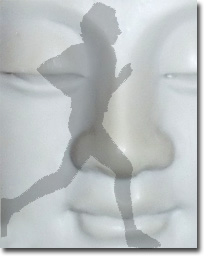 As a member of the fastest New Trier girls cross country team in school history -- and a practicing Buddhist -- the senior from Wilmette is an example of how meditation can translate into a peak athletic performance.

She even started a "meditation club" two years ago at the high school and curiousity about the practice has drawn the interest of more than 40 students over that span.

Lehmann and her family are followers of Sakyong Mipham Rinpoche, a Tibetan lama who is the director of Shambhala, a worldwide organization of meditation and retreat centers. The Rinpoche recently conducted a day-long seminar at National Louis University in Evanston and was also in the area to promote his latest book, "Ruling Your World -- Ancient Strategies for Modern Life."

The Rinpoche -- a Tibetan honorary title meaning "precious jewel" -- is an accomplished athlete himself. An award-winning equestrian who started running marathons about two years ago, he's now in the 3:30 range as a runner.

"I've always been interested in athletics and how it relates to meditation," said Mipham in a recent telephone interview. "I've been competing in sports for years and I've been running off and on.

"I grew up with meditation and you're training your mind and your body at the same time. You don't necessarily 'dull down' when you're meditating. Instead it brings you a sense of brightness. I've noticed that even in high intensity sports when athletes perform well, it's because they're focused and aware -- not just relaxed.

"Right now a lot of research is being done about meditation and its effects on the brain. It can be applied to business or any part of your life. People perform better when they use it."

"I don't always meditate every day, but if I go awhile without meditating, I really don't feel right inside," admitted Lehmann, who as a sophomore won the Central Suburban League South division 800-meter championship in track. "In practice I'll stand with my eyes closed and feel the ground and the heavens above, and that helps calm me down.

"At bigger races -- like at State -- I'll go find somewhere to sit and meditate."

Lehmann said the club at New Trier is a chance to expose teenagers like herself to the practice and to clear up some misconceptions, too.

"Right now Buddhism has a pretty cool image, so that helps," she laughed. "But once the other kids come in once or twice some of the stereotypes are cleared up. When your mind's going crazy, and you're trying to figure out who you are and what you're doing, it helps to have a connection to something like meditation."

New Trier girls cross country coach John Burnside is a faculty sponsor of the club and says his involvement has definitely been a learning experience.

"When Kelly first wanted to get the club up and running, I just did this to help her out," Burnside said. "But then I read the Rinpoche's first book ('Turning The Mind Into An Ally') and it was definitely interesting to me. I've gotten more and more out of being involved with the club over the years.

"Kelly is such a phenomenal kid, and she's taught me tons. Her father Robert comes in to talk to the kids and he's one of the most likeable guys you'll meet. He chats with the kids about focusing and clearing their minds of extra thoughts that don't need to be there. I'm definitely intrigued by it.

"It's a pretty challenging thing because it requires practice and discipline. It's an amazing thing to see. Either meditation is a big factor in Kelly's being such a strong kid mentally -- or she may be someone who's really strong mentally who also happens to meditate."

"What we do in tennis isn't connected to the meditation club, but I'd recommend it, particularly for students whose thoughts come so quickly and with so much conflict," said New Trier boys tennis coach Tim Kajfez.

"Meditation can sometimes help you focus on the clarity you need to help you regain perspective in a match. Clarity is really important because it's really easy to get stuck on that one point you just lost.

"In tennis we work on honing concentration skills on a daily basis, and that's what meditation does for some. I do think it's contributed to our success over the last couple of years. We've had a number of players who have performed at a higher level than people thought they would. But it's so difficult, it's something you have to work on every day."