Living in temples to escape pressure

How do city dwellers fare when they visit a temple? Do they achieve spiritual release?

Hong Kong, China -- Pressure, now that is not an uncommon word for modern people. In Hongkong, bus drivers use dirty words to release it. 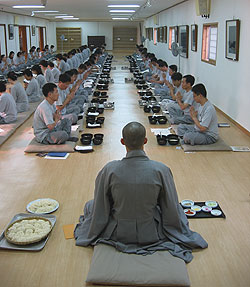 While in Chongqing, more and more white collar workers are choosing to make short stays in temples to explore what life would be like without it - peace and contentment.

Well, how do city dwellers fare when they visit a temple? Do they achieve spiritual release?

Dressed in a long robe, 34 year old Wang Shiming is exercising with a broom. If it wasn't for his hairstyle and shoes, people would think he was just an ordinary monk.

Seems nobody can understand how he feels now. Afflicted by various troubles recently, this is not the first time Wang has escaped to this temple, not to pray, but to get away from the stresses of life.

Wang has been an insomniac for a while. "Every time I went to bed, all kinds of samples and data went to my mind," he says.

From his monthly phone bill to the future development of his business, Wang, the owner of a clothing manufacturer, has to think about it all. Always having to think back to whether or not he locked home though he had already arrived office.

The city's KTVs, theaters and clubs were not enough to rid Wang of all the overwhelming pressure. Mild-tempered Wang was shocked himself when he scolded one female colleague to tears for being 5 minutes late.

After having to go to the doctor to check a stomach ache, he says, "I was using my health to gain money."

Recalling all of the things he does miss about life in the city, the sunrise, the breakfast, Wang calls his assistant. But he turns off the phone immediately, a far cry from before, when answering the phone was his main job in the afternoon.

Time to work in the temple now. Today's task is to move books. Wang sweats a lot but feels much lighter.

Forget about the shower at home, Wang takes a cold shower at the temple, afterwards joining in a chat with some monks. He feels great after some loud laughter. Going to bed at 8:30, the end to a perfect day means a new day too.

"Going to the temple for a short time is a way of escaping pressure, but not the only way," Chinese psychologist Chen Lan says. "It's common that white collar workers in the city have to shoulder pressure from their work, studies, competition, marriage, and education for their child." But, just as the sources of pressure may differ, "the way to release pressure could be different too. If it's too severe, people have to go to a psychologist."

Well, for those with a lot of stress, but not too overwhelming an amount, a visit to a temple may be a good fit. And, in addition to being a good way for some to release pressure, temple stays can also promote Buddhism, Monk Deman of Huayan temple says.

Actually temple stays have already gained popularity in Thailand, Singapore, and Malaysia. Besides allowing visitors to experience a monks' life in the temple, parents also sign their children up for short stays to teach them discipline.