Trapped inside our minds

Toronto, Canada -- Saying a sunset is beautiful instead of just enjoying it, sitting in a traffic jam willing cars to move, or continuing to read a book long after losing interest in it are all examples of what Andre Kukla sees as the "mental traps" that undermine enjoyment and sap productivity in modern-day living. 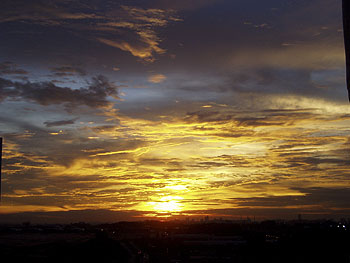 << The things we tell ourselves inside our heads may be a form of self sabotage. Saying the sunset is beautiful, is not the same as enjoying the beautiful sunset, says Andre Kukla in his book "Mental Traps"

Mental traps are habitual ways of thinking that suck our energy, take up enormous amounts of time, and contain nothing worthwhile, said Mr. Kukla, a 64-year-old professor emeritus of philosophy and psychology at the University of Toronto.

"No one in modern society is entirely free of mental traps, we all have them to some degree or another," said Mr. Kukla, author of Mental Traps, a manual for the intelligent consumer.

However, for the most part, people are not aware of the mental traps behind their actions.

"Friends and relatives all seemed very interested. Other people kept identifying with them. I discovered based on the reactions of other people that they had mental traps as well," Mr. Kukla said.

Despite the obvious Buddhist references, the book has nothing to do with religion or mysticism, Mr. Kukla said. Aside from yoga and meditation, he doesn't engage in any spiritual activities.

Mr. Kukla makes several suggestions as to how to eradicate these traps, but first we need to be convinced that they serve no useful purpose.

"You can catch yourself thinking all kinds of wild, divergent thoughts. You hear a voice in your head talking and the voice is going through the thinking process and you aren't aware of it." he said.

The book is available in bookstores now and Mr. Kukla is working on a follow-up.

PERSISTENCE. Continuing to work on projects that have lost their meaning to us. This trap is often regarded by our society as a value. Example: Watching a bad television program to the end because since we've started it we should finish it.

AMPLIFICATION. Working harder than necessary to achieve something. The means exceed what's required. Example: Rehearsing a speech so many times it becomes dull.

FIXATION. Otherwise known as "killing time." Progress toward a certain goal is blocked. We continue to attend to a task that doesn't need attention. Example: Everything's ready for an 8 p.m. party, but it's 7:30. Instead of doing chores that need attention, we watch the clock for arrivals.

REVERSION. Otherwise known as the "I should have" disease. Our plans have fallen through but we continue to think about them to the point of obsession. Example: We plan to see a film, and arrive at the theatre in time, only to find it cancelled. Whatever else we do, our thoughts constantly revert to the movie we didn't see.

ANTICIPATION. We begin a task too soon. This trap opens up the door to overwork. Example: We're waiting for a letter of either rejection or acceptance and we already have two manufactured responses. If we had waited until the letter actually came, we would only have had to work half as much.

RESISTANCE. Also known as the "let me just" disease. Our attention gets diverted, but we try to hold on to our familiar course of action. Example: We're grading papers while knowing we have to get to the store before it closes. Instead of letting the marking wait, we tell ourselves that we only have a couple left, we can rush to finish them. By the time we get to the store it's closed. We pay the price for resisting change.

PROCRASTINATION. We decide to get something done, but have an incredible amount of difficulty in starting it. Example: We have to write a report, but we first organize our papers, then we clean our entire desk, and then do stretching. We have distracted ourselves from our primary task.

DIVISION. Trying to do two things that require our attention together. Example: We are in the middle of a conversation while solving a financial problem. Neither task is given proper focus.

ACCELERATION. Acting faster than the pace which is most advantageous to our task. Example: We try to fix a broken pipe in such a rush that it immediately breaks again. All our work has gone to waste, because we rushed.

REGULATION. Instead of letting impulse guide us, we adjust our behaviour to what we think is proper. Example: It's 6 p.m. and we eat dinner, because it's "dinner-time", regardless of whether we're hungry.

FORMULATION. We think or say something simply because it seems to be true. Example: We're watching a sunset and feel the need to say, "what a beautiful sunset." We are not content to just enjoy it.