Adelaide, Australia -- Forget dieting, it will only make you fat in the long run. Long-term weight loss is more about lifestyle changes, a conference on the Sunshine Coast will be told this weekend. 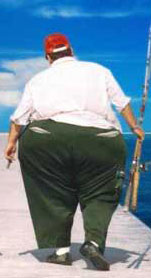 << Dr Blair-West taught his patients techniques involving Zen Buddhism and mindfulness to get them to cut back the size of their portions and lose the weight they wanted - permanently.

Keynote speakers at The Clinicians Challenge in Treating Obesity will be husband and wife team professors Peter Herman and Janet Polivy.

The couple are psychologists at the University of Toronto, Canada, and world authorities in restraint theory, which holds that if you deny yourself food, you ultimately overeat.

Prof Polivy said most people trying to lose weight had unrealistic expectations and self-defeating behaviour from the start of their diet.

When it failed, they were actually likely to gain weight before the next attempt, and so the cycle continued.

"I'll be talking about how restraint eating leads to the false-hope syndrome and how this results in failed attempts at dieting but renewed attempts that are no more likely to succeed," Prof Polivy said.

About 50 clinicians nationwide will meet at Noosa Heads in the inaugural symposium of the newly formed Obesity Prevention and Treatment Society (OPATS).

Its spokesman, Brisbane psychiatrist George Blair-West, today said that people knew what to eat but the question remained why didn't they do what they should do.

"We are better at treating most cancers than we are at treating obesity," Dr Blair-West said.

"Our five-year success rate in treating obesity is less than 20 per cent, and that's why we have this thing spiralling out of control," he said.

Research also showed that after people lose weight, they usually regained all they had lost plus another 15 per cent.

One of the topics for discussion at the conference will be whether obesity was an addiction or a willpower deficiency.

Unlike the campaign to make smoking unpopular to cut the addiction rate, food could not be made unpopular.

"That's why, with this conference, we really want to bring in this focus on the psychological conditions and teach clinicians, particularly the front-line professionals, that there is a complexity here they must start to deal with."

One way to treat the problem was a sophisticated dietary approach involving allowing the patient to pick around four or five foods to which they were deeply attached and removing other fattening foods they liked less.

Dr Blair-West taught his patients techniques involving Zen Buddhism and mindfulness to get them to cut back the size of their portions and lose the weight they wanted - permanently.