What happens when the mind wanders?

Aberdeen, Scotland (UK) -- Scientists have discovered what happens in the brain when the mind wanders. Until recently, little has been known about the neural mechanisms that give the mind its ability to daydream. 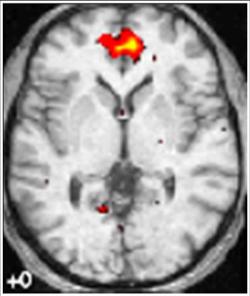 But now psychologists and neuroscientists in Aberdeen and America have revealed that a collection of areas in the brain termed the default network, supports what is known as mind wandering.

The findings are published today in top journal Science.

The scientists carried out their research with the help of volunteers whose brains were scanned as they performed simple memory tasks.

The results revealed that when participants performed practised tasks with which they were familiar, activity in regions of the default network was associated with episodes of mind wandering, a finding that underscores the importance of this system in guiding the stream of consciousness.

Professor Neil Macrae, Chair of Psychology at the University of Aberdeen, said: "Mind wandering has perplexed scholars for centuries, both in terms of its neural basis and psychological significance.

"For example, what happens in the brain during an over-learned or boring task when the mind spontaneously flits from thought to thought.

"The current work serves as an initial step in identifying the neural operations that support this core component of human cognition."

Quite why the mind wanders at all however remains open to debate.

Professor Macrae added: "One possibility is that mind wandering, as a form of spontaneous mental time travel, reflecting on the past, planning for the future, lends a sense of coherence to one's past, present and future experiences, enabling one to make effective choices and decisions."

The paper in Science entitled Wandering Minds: The Default Network and Stimulus-Independent Thought was a collaboration involving the University of Aberdeen; Dartmouth College, Hanover, USA and Harvard University, USA.