Misery is the secret to happiness

California, USA -- The key to a happy relationship could be accepting that some miserable times are unavoidable, experts say. Therapists from California State University, Northridge and Virginia Tech say accepting these problems is better than striving for perfection. 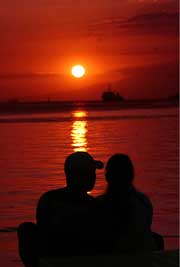 And they blame cultural fairytales and modern love stories for perpetuating the myth that enjoying a perfect relationship is possible. The report was published in the Journal of Marital and Family Therapy.

But this belief can eventually cause people to believe that with enough effort they can eliminate suffering. And experts say this is an unrealistic aim in relationships, and striving to achieve it can lead people to feel they have failed.

Jan Parker of the Association of Family Therapy said: "The authors are right to point out that the pursuit of relationship nirvana can be potentially damaging."  She said it was important to explore what people mean by a happy and healthy relationship, because nobody’s life or relationship can be in a permanent state of happiness—there will always be more difficult times.

She said couples need to build strengths, such as understanding, in their relationships to help them cope in these hard times and appreciate the good times.

Nadine Field, a consultant psychologist, said it was a "fantasy" that any relationship could be perfect and that striving for such an impossible state could lead to bitter disappointment.

She said this disappointment could then cause people to focus on the negative aspects of a relationship, and lead to more disappointment and resentment.

She said: "People need to try to understand their partners through communication, rather than demanding perfection of them."

The technique requires individuals to focus on their present thoughts and actions, and is already used by some psychiatrists in the UK.

They say although Buddhism is considered a major religion, the technique is taken from Buddhist psychology which could be useful aside from Buddhism's spiritual beliefs and practices.

The authors say family therapists can integrate the principles into their work to help patients change the way they relate to the forms of suffering that can occur in intimate relationships, such as abuse, divorce, rejection, and loss.