In the Classroom, a New Focus on Quieting the Mind

OAKLAND, Calif. (USA) -- The lesson began with the striking of a Tibetan singing bowl to induce mindful awareness. With the sound of their new school bell, the fifth graders at Piedmont Avenue Elementary School here closed their eyes and focused on their breathing, as they tried to imagine “loving kindness” on the playground. 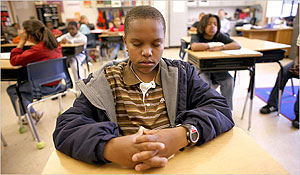 << James Alexander, a student at Piedmont Avenue Elementary in Oakland, Calif., practiced being mindful, using a technique he learned in class.

“I was losing at baseball and I was about to throw a bat,” Alex Menton, 11, reported to his classmates the next day. “The mindfulness really helped.”

As summer looms, students at dozens of schools across the country are trying hard to be in the present moment. This is what is known as mindfulness training, in which stress-reducing techniques drawn from Buddhist meditation are wedged between reading and spelling tests.

Mindfulness, while common in hospitals, corporations, professional sports and even prisons, is relatively new in the education of squirming children. But a small but growing number of schools in places like Oakland and Lancaster, Pa., are slowly embracing the concept — as they did yoga five years ago — and institutions, like the psychology department at Stanford University and the Mindfulness Awareness Research Center at the University of California, Los Angeles, are trying to measure the effects.

During a five-week pilot program at Piedmont Avenue Elementary, Miss Megan, the “mindful” coach, visited every classroom twice a week, leading 15 minute sessions on how to have “gentle breaths and still bodies.” The sound of the Tibetan bowl reverberated at the start and finish of each lesson.

The techniques, among them focused breathing and concentrating on a single object, are loosely adapted from the work of Jon Kabat-Zinn, the molecular biologist who pioneered the secular use of mindfulness at the University of Massachusetts in 1979 to help medical patients cope with chronic pain, anxiety and depression. Susan Kaiser Greenland, the founder of the InnerKids Foundation, which trains schoolchildren and teachers in the Los Angeles area, calls mindfulness “the new ABC’s — learning and leading a balanced life.”

At Stanford, the psychology department is assessing the feasibility of teaching mindfulness to families. “Parents and teachers tell kids 100 times a day to pay attention,” said Philippe R. Goldin, a researcher. “But we never teach them how.”

The experiment at Piedmont, whose student body is roughly 65 percent black, 18 percent Latino and includes a large number of immigrants, is financed by Park Day School, a nearby private school (prompting one teacher to grumble that it was “Cloud Nine-groovy-hippie-liberals bringing ‘enlightenment’ to inner city schools”).

But Angela Haick, the principal of Piedmont Avenue, said she was inspired to try it after observing a class at a local middle school. 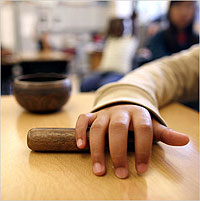 A student holds an instrument used in mindfulness techniques  >>

“If we can help children slow down and think,” Dr. Haick said, “they have the answers within themselves.”

It seemed alternately loved and ignored, as students in Ms. Graham’s fifth-grade class tried to pay attention to their breath, a calming technique that lasted 20 seconds. Then their coach asked them to “cultivate compassion” by reflecting on their emotions before lashing out at someone on the playground.

Tyran Williams defined mindfulness as “not hitting someone in the mouth.”

“He doesn’t know what to do with his energy,” his mother, Towana Thomas, said at a session for parents. “But one day after school he told me, ‘I’m taking a moment.’ If it works in a child’s mind — with so much going on — there must be something to it.”

Asked their reactions to the sounds of the singing bowl, Yvette Solito, a third grader, wrote that it made her feel “calm, like something on Oprah.” Her classmate Corey Jackson wrote that “it feels like when a bird cracks open its shell.”

Dr. Amy Saltzman, a physician in Palo Alto, Calif., who started the Association for Mindfulness in Education three years ago, thinks of mindfulness education as “talk yoga.” Practitioners tend to use sticky-mat buzzwords like “being present” and “cultivating compassion,” while avoiding anything spiritual.

Dr. Saltzman, co-director of the mindfulness study at Stanford, said the initial findings showed increased control of attention and “less negative internal chatter — what one girl described as ‘the gossip inside my head: I’m stupid, I’m fat or I’m going to fail math,’ ” Dr. Saltzman said.

Dr. Susan L. Smalley, a professor of psychiatry at U.C.L.A. and director of the Mindful Awareness Research Center there, which is studying the effects on schoolchildren, said one 4-year-old noticed her mother succumbing to road rage while stuck in traffic. “She said, ‘Mommy, Mommy, you have to sing the breathing song,’ ” Dr. Smalley said.

Although some students take naturally to mindfulness, it is “not a magic bullet,” said Diana Winston, the director of mindfulness education at the U.C.L.A. center. She said the research thus far was “inconclusive” about how effective mindfulness was for children who suffered from trauma-related disorders, for example. It is “a slow process,” Ms. Winston added. “Just because kids sit and listen to the bell doesn’t necessarily mean they’ll be more kind.”

Glenn Heuser, who teaches a combined fourth- and fifth-grade class at Piedmont, said one student started crying about a dead grandparent and another over melted lip balm. “It tapped into a very emotional space for them,” Mr. Heuser said. “They struggled with, ‘Is it O.K. to go there?’ ”

Although mindful education may seem like a New Yorker caricature of West Coast life, the school district with possibly the best experience has been Lancaster, Pa., where mindfulness is taught in 25 classes a week at eight schools. The district has a substantial poverty rate, with 75 percent of students qualifying for free lunch.

Midge Kinder, a yoga teacher, and her husband, Rick, started the program six years ago at George Ross Elementary, where their daughter Wynne taught.

Camille Hopkins, the principal, said initially she was skeptical. Growing up in South Philadelphia, “I was never told to take an elevator breath”— a way of breathing in stages, taught in yoga — “or hear the signals of chimes to cool down,” Ms. Hopkins said.

But the stresses today are greater, she conceded, particularly on students who lived with the threat of violence. “A lot of things we watched on TV are part of their everyday life,” she said. “It’s ‘Did you know so-and-so got shot over the weekend.’ ”

In after-school detention, children are asked to “check in with their feelings,” Ms. Hopkins said. “How are you really changing behavior if they’re just sitting there?”

Yolanda Steel, a second-grade teacher at Piedmont, said she was hopeful that the training would help an attention-deficit generation better manage a barrage of stimuli, including PlayStations and text messages. “American children are overstimulated,” Ms. Steel said.

“Some have difficulty even closing their eyes.”

But she noted that some students tapped pencils and drummed on desks instead of closing their eyes and listening to the bell. “The premise is nice,” Ms. Steel concluded. “But mindfulness can’t do it all.”