How to succeed in business: Meditate

With hellish hours and info overload now the norm, the C-Suite set is turning to extreme meditation to cope, says Fortune's Oliver Ryan.

New York, USA -- The crowd of Harvard Business School alums who gathered at their reunion to hear networking expert Keith Ferrazzi speak earlier this summer might have expected to pick up strategies on how to work a room, remember people's names, or identify mentors. But tactical skills, it turns out, aren't what turned Ferrazzi into a bestselling author or sought-after speaker. 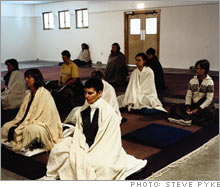 << Students meditate at a Goenka center in Massachusetts.

Instead Ferrazzi let his fellow alums in on a little secret. The key to connecting, he told the group, is "not being an a**hole." And the most effective path he's found? Meditation. Exercise and prayer work too, he said, but meditation has been so effective that he now spends ten days every year at a silent meditation retreat. In other words, the man whose latest book is "Never Eat Alone" credits much of his success to alone time.

Meditation has been around for thousands of years, but not so long ago extended retreats or programs that banned speech were reserved for aging rock stars or college students on the ten-year plan. And while the practice isn't exactly mainstream in corporate America, more and more executives are open to anything that might help them thrive in - or temporarily disconnect from - today's BlackBerry-addled ADD business climate.

Particularly hard-core is Bob Shapiro, the former CEO of Monsanto (Charts, Fortune 500), who has done three ten-day silent retreats and is considering a 30-day tour. He must certainly be the first person to serve simultaneously on the boards of the New York Stock Exchange and the Center for the Contemplative Mind in Society. Shapiro says that meditation has improved his ability to listen and to think creatively - and there's an increasing amount of scientific evidence to back that up. Dr. Richard Davidson of the University of Wisconsin at Madison has, among other experiments, used cranial electrodes and MRI scans to study Tibetan monks on loan from the Dalai Lama. His basic finding: The brain functioning of serious meditators is "profoundly different" from that of nonmeditators - in ways that suggest an elevated capacity to concentrate and to manage emotions. He calls meditation a "kind of mental training."

Like Ferrazzi and Shapiro, the most intrepid corporate types gravitate toward vipassana meditation centers (the term translates to "insight"), founded by S.N. Goenka, an 83-year-old ex-Burmese businessman. Though inspired by Buddhism, Goenka centers are secular, and the introductory retreat features ten days spent in "noble silence." "It takes that much time for people to calm down," says Andrew Cherng, the chairman of Panda Restaurant Group (as in Panda Express).

Life at a Goenka center is communal; the morning bell sounds at 4 A.M. and lights are out at 9:30 P.M. In between are meals, lectures and nearly 11 hours of private and group meditation. "I've found that you're so sharpened by the ten days alone that you recover that lost time in the next ten days," says Subhash Chandra, founder of Indian media giant Essel Group, who has "sat" 15 retreats.

The retreat, however, is only the start. Back home, students are advised to meditate twice a day. Shapiro admits he struggles to find the time, but he also notes an old saying: "If you can't spend half an hour meditating, you need an hour."