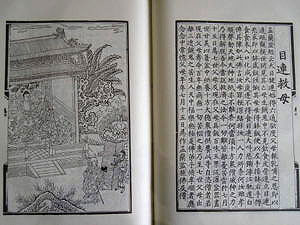 << The section of the Ullambana Sutra which says that Maudgalyayana, a senior disciple of the Buddha, discovered through his meditative powers that his mother had been reborn in one of the realms of misery.

In Mahayana Buddhism, it is believed that the gates of hell are opened on the first day of the seventh lunar month and ghosts may visit the world for 15 days.

Food offerings are made during this time to relieve the sufferings of the ghosts. On the fifteenth day, Ulambana or Ancestor Day, people visit cemeteries to make offerings to the departed ancestors. Many Theravadins from Cambodia, Laos and Thailand also observe this festival.

Ullambana is a Sanskrit word which means "Rescuing those who are hanging upside-down." This refers to the extreme suffering of the ghosts in the hells who are as tormented as one hanging upside-down would be. So the Ullambana is performed especially for releasing those undergoing the painful suffering of being hungry ghosts and enabling them to be reborn in the heavens.

According to Mahayana beliefs, Ullambana came about based on an incident where Maudgalyayana (Mogallana, a senior disciple of the Buddha) discovered through his meditative powers that his mother had been reborn in one of the realms of misery. Distressed, he approached the Buddha for help, who then advised him to make offerings to the Sangha, as the merit of doing so would help relief the suffering of his mother and other beings.

Making offerings to relief the suffering of the departed and other beings in the realm of misery thus became a popular communal observance. Ullambana is observed by making offerings to the Order of monks and nuns, reciting sutras and performing acts of charity. The merit from these deeds is then shared with all beings.

“Ullambana is a day to give offerings to monks and transfer merits to the departed ones,” says Buddhist Missionary Society of Malaysia president Ang Choo Hong.

But Ang says the Hungry Ghost as celebrated mainly by Chinese people and Ullambana are two different festivals. Most people think they are the same because they fall on the same day in the lunar calendar.

“Actually, the Hungry Ghost festival was already celebrated by folks in ancient China before the advent of Buddhism and Ullambana in the country,” he says.

A related holiday is the Japanese Buddhist festival known as Obon, beginning on the thirteenth of July and lasting for three days, which celebrates the reunion of family ancestors with the living. 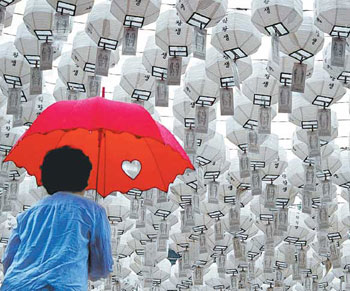 Lanterns hung at the Bongeun Temple in Seoul, South Korea to mark Ullambana>>

At the Bongeun Temple, in Samsung-dong, Seoul, thousands of lanterns were hung on Sunday on the eve of Baekjung, which falls on the lunar 15 holiday. On Baekjung, also called Buddhist All Soul`s Day, it is customary for people to stop farming and perform a ritual to heaven. Buddhist temples regard it as the second most important holiday after Buddha’s Birthday.

In Malaysia, at the Kuala Lumpur Sri Jayanti Maha Vihara at Sentul, devotees marked Ullambana by making offering and transference of merits to their dearly departed. Nine monks led the chanting and blessing session. Two chanting sessions, one in the morning and another at night, were held to mark this auspicious day.

In Singapore, the Kong Meng San Phor Kark See Monastery (KMSPKS) conducted large scale prayers for ancestors and beings suffering in the realms of misery. Hundreds of devotees were seen gathered at the temple to pay respect to their deceased relatives and make offerings to the Buddha.

Apart from educating the Buddhist public about the values of participating in Ullambana, KMSPKS also disseminated flyers debunking several myths and folklores. One of the myth mentioned was that the avoidance of burning hell papers will result in being less compassionate. Instead, devotees are advised to offer prayers and chanting, and said that it was more helpful to do good deeds and dedicate merits in the name of the deceased.

An interesting aim of this program is not so much on alleviating ignorance, but one that advocates the protection of the environment. It's flyer says that "...environment pollution including burning paper is one of the greatest problems humanity faces. In Chinese Mahayana Buddhism, burning joss paper and the like is more a symbolic gesture. In fact, Buddhism does not encourage the burning of joss paper".

The Ullambana festivities at the KMSPKS will be carried out from Aug 24 to Aug 27, 7 pm.