Seoul, South Korea -- Seventeen years ago, Sang-hoon Bae could not speak intelligibly, walked with a severe limp, and had a bad attitude. Today, Bae is known to his co-workers as a warm and kind person who always remembers birthdays. 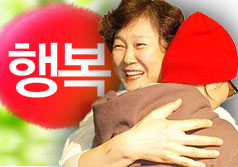 Bae, 40, was born with the crippling disease cerebral palsy. He still walks with a limp, his fingers cannot grip, and his speech is impeded. But he has a sunny smile on his face and can speak clearly enough for everyone to know that he is extremely intelligent. In fact, Bae is the joke-reciting "life of the party" at the Jungto Society, a Buddhist organization that works for the empowerment of society using the philosophy of "Buddhist practice."

Born with cerebral palsy, Bae thinks his handicap resulted from the shock that his mother received when she saw his uncle commit suicide. He suffered much abuse as a child, when kids from his village would make fun of him and call him names. "I didn"t realize that I had all of this hurt in me about it until I was 23 years old and attended a Buddhist retreat, but on the second day I broke down crying and all of these memories of that time came back to me."

The true miracle came after the retreat, when almost immediately, the severity of his physical disability was lessened. "I could talk more clearly, walk with less pain. It was incredible," says Bae. "I think this proved to me the relationship between mind and body. After I had released these hidden emotions, my body could relax and begin to function again."

Before he came to the Jungto Society, Bae worked in a labor organization called Sungnam Labor Cultural Society, but found he wasn"t happy with the labor movement focusing on so many outside negatives (the government, management, etc.) but not focusing on the inside. After attending the Buddhist retreat, Bae decided to stay with Jungto and do more "study of the mind," and has been part of it ever since.

The Jungto Society's activities are based on three main principles: pure mind, good friends, and clean land. Their departments include the Buddhist Academy for Ecological Wakening which holds periodic environmental camps and training programs; the Korea Join Together Society which supports their schools and hospitals in India; Good Friends which works with North Korean refugees, and a youth center.

Similar to the program that changed Bae's life, the Jungto Society uses Buddhist philosophy to counsel youth as well as adults through various retreats. Their philosophy is to help people look inward to the solution of their problems instead of outward, such as learning anger management. They work not just through words and thoughts, but through practice.

"Working here is like practicing all of these principles I"ve learned about. That is one of our purposes," says Bae.

The exercise illustrates the main difference between Buddhism and Christianity. Bae give an example: In Buddhist teachings, there is a story about a woman whose son was dying. She came to Buddha and asked him to save her son. Buddha told her to bring him mustard seeds from a family in the village that had not experienced death. In the Bible, Jesus rose Lazarus from the dead.

Years after the beginning of his path to enlightenment, Bae realized something important. In a strange way, those children making fun of him were actually showing him affection or at least interest. "There was another handicapped kid in my neighborhood who used to throw stones at kids who teased him. After a while, everyone left him alone. I used to be envious of him, wishing I had the guts to do that. But in the end, he committed suicide. He was lonely. I, in a strange way, at least had friends.

For more information about the Jungto Society, please call 82 2 587 8990 (English speakers ok) or check out their web page at http://jungto.org/english/index.html