Vale of Glamorgan, Wales (UK) -- WELSH club pro John Hastings believes all golf instruction books should be thrown away – and that one of the most valuable he has read to help golfers was all about Buddhism. 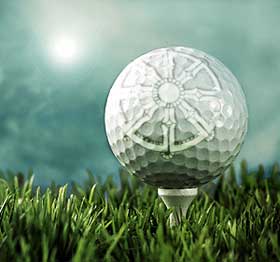 The professional at Cottrell Park in the Vale of Glamorgan, Hastings has travelled round Europe in some high-powered jobs, most notably at the only Bernhard Langer Academy in France.

But his views will still cause some splutterings among his fellow pros.

“It also says there are no wrongs or rights, only experiences and that you learn through experience.

“I find a lot of people aim to the left and the moment you say to aim to the right, they actually aim down the middle.

“If you say to aim down the middle, where is it – you need the two extremes to find the middle. I learned that by reading about Buddhism, not from golf books – I would throw them all away.

“Golf books are OK if you have a coffee table with one leg shorter than the other, just slip it under that and leave it there as long as possible.”

Hastings is a PGA qualified professional who played a few tournaments on the European Tour before moving into teaching in Germany and France and then returning home to Wales.

He started as a conventionally technical coach, but now believes that approach is more of a hindrance than a help to most golfers.

In the Art of Course Golf there is a classic lesson on how to put off an opponent by asking whether they breathe in or out on the backswing.

The opponent then spends the time concentrating on something they do naturally and their game falls apart.

That is almost a mirror opposite of the thinking of Hastings, who believes the Far Eastern relaxation techniques are of far greater use than technical tips to help the average golfer to do things naturally rather than through concentration.

The essence of his teaching is to focus on the club head rather than the body, if you have a problem hitting it to the right then try hitting it to the left, if you are too tense then relax to the extent of going floppy... and so on.

“A pendulum action is the simplest thing to do, but is also the best way of having the club head going through straight with almost no effort,” said Hastings, swinging a club straight up and down between thumb and forefinger to demonstrate his point.

“I believe it is all about the club head, everything else follows from that, after all what is it that hits the ball?

“People learn more from experience than being told what to do.

“Rather than telling them the position their left arm should be in, I will ask if they are aware of their left arm and help them feel right in themselves – no one swings the same way anyway.

“If someone has a headache, then you can just take tablets, but I believe you need to find the root cause to really get rid of the problem.

“Thousands of golf pros give players tablets, I like to get down to the root cause.

“Of course there are certain basics in terms of grip and stance and the end goal is the same with any professional. It is just that I think it is more effective to get there by a different route.

“I want a good technique, but it has to be simple, as I honestly think the modern way of teaching is making a simple game difficult. One thought can be destructive and pros fill people’s heads with thoughts.”

It is an approach which is striking a chord with some of his pupils. James Board is one who has regained his enjoyment of golf with the help of Hastings.

“The only sport I could not play was golf, but I decided to give it one last try,” he said.

“I came to have lessons with John and realised how simple the game was – it was all the thoughts in my head making it a hard game.

“Now my confidence is growing and I am enjoying it. I have played rugby, football, cricket, snooker and could not understand why I could not play golf, but now it is making a huge difference.

“I want to be good and this is allowing that to happen. A lot of it comes down to the tension in the body, so it is changing the thought patterns – it is a very clever way of making minor amendments to someone’s golf swing without ever being critical.”

It is a view backed up by another on the Cottrell Park range, George Wilson, who said, “John always tells me to go floppy when I am feeling tense.

“My friends wondered how I had such a smooth backswing and it is just by trying to go floppy.

“I started because I heard John teaching while I was up here practising and I thought he sounded so positive. What he was saying made sense to me.”

There is a technical edge to what Hastings will say, given his background in Bavaria and France, teaching in Baden Baden and Strasbourg.

“Most golfers slice because they get to the top of the swing and then throw the right shoulder at it, that comes from the mind telling them to hit it hard,” he said.

“I say not to hit it hard, let gravity take over, it is learning to do less to get more which is basically my teaching philosophy – never try because it exacerbates the problem.

“Golf tips will work on Monday, but not on Tuesday, and as far as I am aware I am the only person teaching in this way in South Wales – throwing all the stuff out that most people teach.

“One guy said to me last week that there is so much to remember, but there is not.

“A golf swing is one movement and the club head will take you to the positions to play better golf with a better technique if you concentrate on it – new-age teaching with old-age philosophy.

“I have taught both ways and I know what works best for me.”