Neuroscientist Shanida Nataraja has proved meditation does more than clear your head, it can put both halves of your brain to work, improving your concentration, memory and decision-making. She tells Andy Darling how it works

London, UK -- When Dr Shanida Nataraja was growing up in London during the 70s and 80s, meditation wasn't an esoteric, mystical practice done by hippies in baggy orange clothes. It was what her parents did. 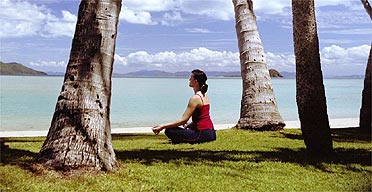 "I was raised in a family where meditation was a central part of life. My father is Indian, from a Hindu background, and my mother is Dutch and Catholic.

Over the course of growing up, I saw them embrace different meditation approaches: Hinduism, Buddhism, and then a Christian approach. I rebelled. We hate to believe that our parents know something we don't, so, when I became a research scientist, I wanted some concrete proof that what they were doing worked. I really didn't expect to find that meditation plays such a role in optimising brain function and health, from cognitive abilities to cardiovascular wellbeing."

The fruits of her PhD in neurophysiology, and post-doctoral research at the neuroscience department of Johns Hopkins School Of Medicine, Baltimore, are presented in her new book, The Blissful Brain: Neuroscience and Proof of the Power of Meditation. The key to meditation's success, it seems, is the concept of whole brain integration. According to Nataraja, westerners use the left halves of their brains too much.

"Generally speaking, the left hemisphere is associated with analytical, rational and logical processing, whereas the right hemisphere is associated with abstract thought, non-verbal awareness, visual-spatial perception and the expression and modulation of emotions. In the western world, most individuals navigate through their everyday life in a fashion dominated by left-brained thinking."

Missing out on right-brain activity results in too much thinking going on, and not enough feeling. Too much frantic doing, not enough being; or, as Bruce Lee puts it after slapping an overly thoughtful pupil in Enter the Dragon: "Don't think, feel!" There is a Buddhist expression, "You are not your thoughts," which refers to the tendency for our ceaseless flood of thoughts, characterised as chattering monkeys, to overwhelm us, leaving us stressed and unable to take a calm step back and realise this is not all that we are.

Nataraja's research, using galvanic skin response meters (which detect emotional changes through the skin) and electroencephalograms (or EEGs, which measure electrical activity produced by the brain), demonstrates that entering a meditative state can bring about the calmness, the stilling of the chatter, the shift into right-brain mode that we need. Increased alpha brain wave activity is detected, a sign that we're activating the parasympathetic nervous system, as opposed to the adrenaline-releasing sympathetic system. More parasympathetic activity means less stress and therefore better heart health.

In these overly stimulating times, reaching a meditative state is not necessarily easy. Even an apparently simple activity such as silently counting "one" at the end of an exhalation, then "two" after the next, and so on up to 10, can be scuppered by intrusive thoughts. The key, says Nataraja, is to be kind to yourself, and not to take a punitive approach. "Acknowledging the thoughts and letting them go activates certain pathways in the brain, and those thoughts therefore have less significance than if you tried to forcibly replace or suppress them."

While she encourages people to try to put aside 15 minutes at the beginning and end of every day to quietly sit and focus on being "in the moment", she is keen to stress the importance of being mindful throughout everyday life. "When you're doing the washing up, that's what you concentrate on, that's where you are, not the cup of tea that you'll have when you've finished. During the course of the day, I'm always pulling my mind back to the present. I also do yoga two or three times a week; it took me a long time to find a type of meditation that suited me. I've tried tai chi, chi gung and other approaches, but yoga really works for me with its very specific point of mindful focus on the postures. Because of my scientific mind, I like Jon Kabat-Zinn's approach, but I see there being many roads that lead to Rome."

However, as Nataraja says, many roads lead to Rome. Only last year, the film director David Lynch was travelling the world promoting transcendental meditation's use in schools, and a growing number of corporations, including Deutsche Bank, Google and Hughes Aircraft - worlds away from incense, bells and robes - have clocked the studies that suggest that decision-making, attention and memory can all be enhanced by meditation, and now offer classes to their workers.

And long-term devotees are finding that meditation has become more accessible. In the late 60s, when Alan Fletcher was in his 20s, he began practising transcendental meditation, devised by Maharishi Mahesh Yogi and made famous in the west by the Beatles. At the time, it seemed like the only option.

"I was given my own mantra, to repeat at specific times every day. It was effective for me for a while, no doubt about that, but it also became rather too restrictive, too much of a task, and I drifted away," he says. "These days, it all seems far freer, more laid-back, less affiliated to religions or movements."

Rory Singer was a Buddhist monk in the 1980s. Laid-back wasn't on the agenda. "It was a macho environment, tough monks enduring the unendurable. Meditating was seen as a hard, solitary pursuit, but now it's definitely become much kinder," he says.

Despite this, Nataraja's studies show that novice meditators often tend to put pressure on themselves to be successful, and to get there quickly - a rather left-brain, "Are we there yet?" approach - and consequently take longer to benefit. The electrical activity in the brain recorded by EEG suggests that a relaxed state is hard to come by when you're trying too hard. Singer says this initial frustration is to be expected, and that, as ever, we should not be too hard on ourselves. "Try to remember," he says, "meditation is a pleasurable activity."