The Lotus and the Synapse

Los Angeles, CA (USA) -- My favorite story about the Dalai Lama doesn’t concern his activities on behalf of Tibet, which is one unrelieved tragedy, but is about his interest in neuroscience. A few years ago the Dalai Lama was visiting an American medical school and watched a brain operation. 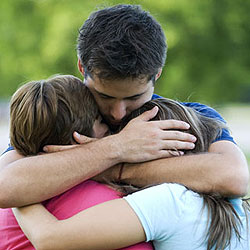 << LEARNED COMPASSION: Meditation may help enhance the ability to feel compassion toward others.
©ALDO MURILLO/ISTOCKPHOTO.COM

Afterwards, he chatted with the surgeon, telling him how his scientist friends had patiently explained to him that all of our thoughts, feelings, memories, dreams and other mental activities are the products of electrical and chemical activity in the brain. But he had always wondered something, the Dalai Lama told the surgeon. If electricity and chemistry can produce thoughts and all the rest, can thoughts act back on the physical stuff of the brain to change its chemical, electrical and other physical properties?

The surgeon dismissed the question with a polite but indulgent no. (The Dalai Lama's English translator, Thupten Jinpa, told me this story in 2005.) The brain produces and shapes mental activity, the brain surgeon said; mental activity does not alter the brain.

That wasn’t a stupid answer 10 years ago, before scientists had fully grasped the potential of the adult brain to change in structure and function—an ability called neuroplasticity. But now researchers have documented a long list of examples of how the brain, once thought to be basically unchangeable after the ripe old age of 3, can indeed change.

But now neuroscientists have documented how “mere” thoughts can also sculpt the brain. Just thinking about playing a piano piece, over and over, can expand the region of motor cortex that controls those fingers; just thinking about depressive thoughts in new ways can dial down activity in one part of the brain that underlies depression and increase it in another, leading to clinical improvement.

The scientist who has worked most closely with the Dalai Lama is Richard Davidson of the University of Wisconsin, Madison. Davidson first met the Dalai Lama in 1992, and since about 2000 has been investigating a question dear to the heart of the leader of Tibetan Buddhism: can mental training such as meditations change the brain in an enduring way? That “enduring” is key: of course the brain “changes”—in the sense that some areas become more active—when you meditate, just as it changes when you think of pink elephants, watch Obama or try to remember your first kiss. Everything we think has a corresponding brain activity. But once the thought stops, so does the activity. Usually. What Davidson wanted to know was whether meditation left a long-lasting imprint on the brain, some change of function or structure.

Since 2004, Davidson and his colleagues have reported that meditation can alter the brain’s attention capabilities and that it can increase production of brainwaves called gamma, which are associated with consciousness. Now they have found another long-lasting brain change produced by Buddhist meditation: practicing compassion meditation (more on this below) alters regions of the brain that make us empathetic, Davidson and his colleagues are reporting this evening in PLoS ONE.

In compassion meditation, as the French-born Buddhist monk Matthieu Ricard explained it to me when we were both visiting the Dalai Lama in Dharamsala for a meeting of neuroscientists and Buddhist scholars, you focus on the wish that all sentient beings be free of suffering. You generate an intense feeling of love for all beings, not fixating on individuals but encompassing all of humanity. It takes practice, since the natural tendency is to focus on one or a few specific suffering people.

Davidson conducted his new study as he has his others on meditation, enlisting expert meditators (the Dalai Lama has asked Buddhist scholars to volunteer their brains to Davidson’s research). Antoine Lutz has the meditators (monks who have 10,000 hours or more of meditation under their belts—er, saffron robes) lie in a functional magnetic resonance imaging (fMRI) tube. The fMRI detects which regions of the brain are active during meditation and which are quiet. It also detects which are active during periods between meditations. The scientists compare these readings to those on non-meditators, who undergo a quickie course in compassion meditation. In this case, Davidson and Lutz enlisted 16 monks plus 16 age-matched controls, members of the UW-Madison community.

Each of the 32 subjects lay in the fMRI and turned compassion meditation on and off, on Lutz’s command. Throughout, Lutz piped in happy sounds (a baby laughing and cooing), distressed ones (a woman who sounded as if she were in pain) and neutral ones (restaurant noise). Two regions lit up with activity:

*When the monks engaged in compassion meditation and heard the happy or distressed sounds, the insula became noticeably active. This structure, near the front of the brain, detects emotions, translates them into bodily responses such as elevated heart rate and blood pressure, and sends information about those bodily changes to other areas of the brain, as if to say, “yo, your pulse just shot up; maybe you better pay attention to whatever caused that.” Insula activity was greatest when the meditating monks heard the distressed sounds, and greater in the monks than the novices. Interesting, but not really surprising.

*Also active was an area called the temporal parietal juncture, particularly the right hemisphere. Other studies have shown this region to perceive the mental and emotional state of others. Significantly, this activity was greater in the monks than the novices during periods when they were not meditating. This is the signature Davidson and Lutz had been looking for: an enduring change in the brain which persist even when the brain is not meditating: it looks as if thousands of hours of meditation ramps up activity in the brain's empathy region, and keeps it ramped up even when you are not engaged in meditation.

The Dalai Lama has long tried, through his teachings, to increase the world’s supply of compassion and empathy. This study suggests that compassion meditation might do that, Davidson said in a statement: “People are not just stuck at their respective set points” for compassion. “We can take advantage of our brain’s plasticity and train it to enhance these qualities.”

Caveat: monks are not Wisconsinites. The nine Asian and seven European monks were different from the novices for the obvious reason that anyone who spends 10,000 to 50,000 hours meditating is not your average Joe. You can’t rule out the possibility that the monks’ brains are inherently different from the get-go, not because of the meditation. That is, maybe an unusual brain leads them to meditate for tens of thousands of hours, rather than lots of meditation producing an unusual brain. Davidson says he still needs to conduct longitudinal studies to see if the brain differences between monks and novices are indeed due to meditation.

But there is one clue that he’s right: he’s been finding that the more hours of meditation a monk has had, the greater the brain changes. Call it a dose-response effect, with meditation being the dose and brain changes the response. That’s a strong hint that the dose causes the response, and is not just a coincidence. And a hint, too, that the Dalai Lama was right and the brain surgeon wrong.