California, USA -- The notion of a beginning of the universe is fundamental to most religions and also to science. The Big Bang theory, which states that the universe originated about 13.7 billion years ago, along with time and space, is supposed to be the best scientific explanation for how the universe began. 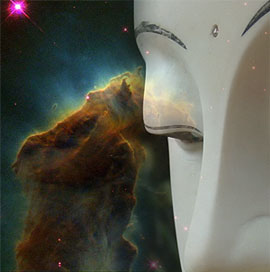 In 1922 the Russian meteorologist and mathematician Alexander Friedman used Einstein's General Relativity theory to construct a model of an expanding universe. The Belgian cosmologist-priest George Lemaître independently did the same thing in 1927 and dubbed the infinitesimally small original state of the universe the "primodial atom". In 1946 the Russian-American physicist George Gamow was able to show that first 300,000 years of the universe's existence, its temperature and density were so great that none of its current structures could have existed and that it contained only elementary particles and radiation.

According to the theory, prior to the "big bang" there was nothing; during and after that moment there was something: our universe. Therefore, the Big Bang theory is an effort to explain what happened during and after that moment (after the "big bang"). If our universe began as an infinitesimally small, infinitely hot, infinitely dense singularity, were did the singularity come from? The theory is incapable of explaining this.

Also, the Bing Bang theory was embraced by many theologians in Europe such as Pope Pius XII. In 1951, Pope Pius XII likened God's words in the book of Genesis, "Let there be light," to the so called explosion of the "big bang" and since then the Big Bang theory has been the popular theory of the so called beginning of the universe.

Is it possible for a Sinhala-Buddhist-scientist (the term "Sinhala-Buddhist" doesn't emphasize on Buddhism per se, the emphasis is on a cultural group) come up with a theory which explains the universe? According to Buddhism, time and space are just concepts created by our perception of the world, and have no existence apart from our perception. In other words, they are not "real".

The idea of an absolute beginning of time is therefore flawed according to Buddhist thinking. Also, Buddhists believe that nothing, not even the apparent start of time and space, can come about without causes or conditions. In other words nothing can start to exist or cease to exist. There can only be transformations. Such a theory as the Bing Bang must then be a mere episode in a continuum without a beginning or an end.

Buddhism considers that phenomena aren't really "born", in the sense that they pass from nonexistence into existence. They exists only in terms of relative or conventional (sammuthi-sacca). Conventional truth comes from our experience of the world, from the usual way in which we perceive it, that is, by supposing that things exist objectively. Buddhism says such perceptions are deceptive and that ultimately phenomena have no intrinsic existence. This is the "absolute truth" (paramattha-sacca). In these terms, the question of creation becomes a false problem since the idea of creation is necessary in an objective world.

However, this does not prevent us from creating a theory for the universe in the conventional world as long as we are aware of the distinction between sammuthi-sacca and paramattha sacca.

In fact the cycle could be further divided in to four parts: The period of or expansion (vivatta-kappa), the period in which the universe remains in a state of expansion (vivatta-ttháyí), the period of contraction (samvatta-kappa) and the period in which the universe stays contracted (samvatta-ttháyí). It is said that the four periods in turn are each subdivided into twenty antara-kappa. Twenty anatara-kappa equals to one asankheyya-kappa (innumerable), thus each of the four parts is called asankheyya-kappa. The whole cycle (four

asankheyya-kappa) is called a maha-kappa (great eon). The current time period could be belong to one of the twenty antar-kappa in vivatta-ttháyí.

According to Buddhism the realms of existence could be divided into three distinct "worlds" (loka), the immaterial world, (arupa-loka), the fine-material world (rupa-loka) and the sensuous world (kama-loka). It is said that the devas living in, for example, Abhassara brahma loka have a life span of about eight maha-kappa which is greater than one whole cycle. Does this mean these devas "exist" outside (where ever that is) the three-dimensional (may be even more spatial dimensional) universe as we know it? Could it be these lokas are different universes or multi-verses (doesn't mean many possible universes but suggest a possible space-time connection between different lokas)?

In our theory, the cyclic universe (it doesn't necessarily mean circular or repetitive) could be described as being made up of four periods: Formation, continuity, destruction and a sort of a non-manifest state which could be an intermediate state between two universes. This cycle has neither an end nor a beginning. The fourth period, samvatta-ttháyí could be thought of as a period which the universe is absent. The scenario of the universe one day collapsing into it self is far from being proven scientifically. We could say that the universe expanded initially and reached a maximum volume and then contracted to a minimum volume. There may be intermediate states which could be described as either accelerated expansions/contractions or decelerated expansions/contractions. We might also be able to show the volume, temperature and density of the universe will not become infinite at any point in the cycle as some have suggested but reach a finite bound.

Our theory seems to contradict with two main ideas of modern astronomy.

According to modern astronomy, if the universe did start other cycles, then they would all be different. The universe would build up more and more energy, so that the new cycle would last longer than the previous one and the universe's maximum size would get larger and larger. If the universe doesn't contain enough matter for gravity to stop its expansion, it will continue to spreading until the end of time and will not be cyclical.

Secondly, if the universe's expansion is to be reversed, then the universe must contain more matter than has so far been observed. According to scientists finding how much matter the universe contains is difficult due to the large amounts of "dark matter" which doesn't send out any radiation and weaker gravitational field. Recent observations of supernovas or exploding stars in distant galaxies seems to show that the expansion of the universe actually accelerating. This accelerating expansion implies the existence of the mysterious "dark energy". If this is the case then the universe will expand forever which differs from our theory. Even though new theories such as the cyclic model seem to agree with our model these new ideas are not supported by observations.

If we use Buddhist concepts carefully with our current knowledge, one day we will be able to come up with our own theory of the universe and evolution and in the process we could contribute valuable insight to modern science. With the guidance of Professor Nalin de Silva the prototypes of our theories seem to be sketched on black boards of Kelaniya University.