The three Rs of tea

HOCKESSIN, Delaware (USA) -- Participating in a thousand-year-old tradition with a priceless social significance built around meticulously practiced manners can be both nerve-wracking and reassuring. 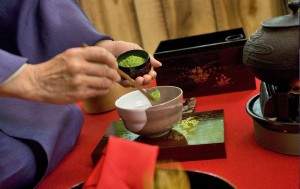 << During the ceremony, powdered green tea or ocha is placed into a ceramic bowl.

Which one suspects may have been the point of Ken Lodge's invitation to attend a traditional Japanese tea ceremony in what is perhaps the only authentic tea house in Delaware.

Lodge, 62, retired from Hewlett-Packard, had traveled throughout Asia, including China, Hong Kong, Japan and Korea, for a good part of his career during the late 1980s and 1990s. He spent five years in Japan as marketing manager for a company Hewlett-Packard had bought.

When he and his wife, Susan, bought their Hockessin home and surrounding woods five years ago, they decided to build a tea house.

It's small, but as big as a traditional tea house or hanare is supposed to be, about 4-1/2 tatami-large. A rectangular tatami, woven with sea grass and traditionally filled with rice straw, is two inches thick, measures 35 by 71 inches and weighs about 75 pounds.

The tea ceremony takes place on tatami mats, just beyond the genkan, or entryway, where one removes one's shoes before stepping up on to the mats for the tea service.

The Lodges' four Japanese guests -- Toyoko Inoue, Kimiyo Matsumoto, Seiko Yonezawa and Setsu Yamamoto -- were visiting for a couple of days. The Lodges got to know Inoue and the tea service ritual while they had lived in Japan, from 1992 to 1996.

"Do you not like it?" Kimiyo Matsumoto asked the honored guest (that would be me), after he clumsily drank three times from a ceramic bowl of green tea or ocha, ending the last sip with a required audible slurp, a quick swipe of the rim, and three short, labored turns of the bowl so the floral pattern again faced the kimono-clad Japanese visitors.

The tea wasn't as bad as he thought it might be.

It tasted bitter, but not overly so, and he knew that, really, the tea itself hadn't all that much to do with the point of an elaborate Japanese tea ceremony.

It was as much about giving and showing respect.

The problem was that the guest hadn't finished drinking all of the tea.

About a third of what tea ceremony instructor Toyoko Inoue had concocted for him, as meticulously as one might make a watch, still pooled in the bowl.

The guest bowed, on his knees, his hands flat on the tatami mat, repeatedly mumbled, "Sorry," as he looked around, and the four visitors, led by Matsumoto, indulgently giggled.

He already mistakenly had grabbed at the tiny, multi-colored sweets -- okashi -- offered to him before the tea had been served.

Matsumoto, the only one of the four who could speak any English, told him he could have as many pieces of candy as he liked, but he saw the panic in her eyes as he took one from the red plate and brought it to his mouth.

No, no. First, place several sweets on the napkin near the plate.

There's always time during a potentially hours-long Japanese tea ceremony to drop a piece of candy on your tongue while observing a master at work.
Hurdling the language barrier

While working in Japan, Lodge fell in love with Japanese culture, and he and Susan decided to learn the language.

"I had 400 people working for me, and it seemed easier for one person to learn Japanese than for all of them to learn English," he says. For three hours a day, seven days a week, the Lodges taught themselves Japanese.

It took them three years to attain a rudimentary knowledge of a tongue that uses up to four different alphabets, all of which may be contained in a single sentence.

They studied every day, on vacation, weekends, weekdays, and those days that are better spent in bed.

Lodge insists that, if he had known how hard it was going to be, he wouldn't have done it.

"People think the Japanese are stand-offish," he says. "But that's the language barrier. We learned the language, and it opened up doors."

The Lodges moved into a Japanese town called Kichijoji, about 45 minutes south, by packed train, from downtown Tokyo, and made friends with the neighbors, including Inoue.

They also took a training course at a Buddhist monastery for two weeks, where they rose at 4 a.m. had a well-ordered breakfast of rice, soup and pickles and meditated in the full lotus position for hours at a time.

Any deviation from a concentration on attaining nirvana earned a sharp rap on the shoulder from the master.

Lodge still misses some things about the Land of the Rising Sun.

"I miss the well-organized aspect of it," he says.

So much so, that he recreated a modern Japanese bathroom in his home -- the ones that have more buttons than Captain Kirk's chair, and that one may use without recourse to bathroom tissue -- and built a separate tea house a few yards from his back door.

Although this was the first official ceremony performed in the tea house, for years Lodge and his wife went there to informally meditate and slowly get plastered by drinking hot sake, a Japanese "rice wine."

But it was the tea ceremony that finally made official his little bit of Japan in the First State.
A way of being

"The samurai made it a formal, celebrated, special occasion," Lodge says.

The principles of the tea ceremony as it became perfected over the centuries include harmony, respect, purity and tranquility.

"It's a discipline, a high sign of respect," Lodge says.

It's also a way of being.

Despite the nervousness that comes with the novice guest's fear of making a serious mistake, it becomes easy to get lost in Inoue's mastery, shown in meticulous but rhythmic movements.

Like Ted Williams swinging a baseball bat, Inoue's movements seem to be all in the wrist -- whether she repeatedly folds and unfolds a red napkin in the same particular way; delicately washes out the tea bowl or chawan; scoops the ocha or tea with a tea scoop and pours it into the bowl; gently whisks the tea; pours into the bowl the water from a tea kettle made hot by a brazier; and hands it off the honored guest via Matsumoto.

Everything is to be admired, from Inoue's skill and the beauty of the floral pattern on one side of the chawan to the curious taste of the tea itself.

The rite of sipping three times and emitting "Ahh" at the conclusion of the final sip causes the master to smile in delight. Returning the bowl, the honored guest bowed to the server for the privilege of drinking.

The greatness of the Japanese tea ceremony to an outsider lies in its feeling of timelessness and in the certitude that it inevitably will stretch into the future as long as it has reached into the past.

That, and the fact that, when one finally rises from squatting on one's knees for nearly an hour, it is a sensuous joy like no other.