St. Petersburg, Russia -- A group of St. Petersburg scientists have returned from the Himalayan Mountains after learning the secrets of an almost-extinct form of Tibetan yoga that they hope can be used to cure diseases in the West. 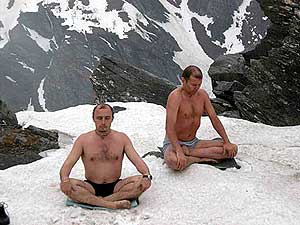 << Rinad Minvaleyev (r) practising Tum-Mo yoga in the Himalayan Mountains during a recent expedition to discover its secrets. Irina Akhipova / For The St. Petersburg Times

The scientists have recently completed a two-month mission to find traces of Tum-Mo, a form of Tibetan Buddhist yoga that preserves body temperatures through excessive production of internal heat despite the body’s exposure to extremely cold mountain climates.

The technique could be applied in areas with extreme cold climates, such as Russia, to prevent and treat heart disease, cancer, tuberculosis, pneumonia and influenza if developed, Rinad Minvaleyev, a physiologist, mathematician and the team’s senior researcher, said.

“In fact, Tum-Mo is about the human being’s adaptation to low temperatures where thermo-dynamic functioning of a human liver is activated to further regulate the heating process,” said Minvaleyev, referring to a mathematical formula he co-established last year.

Irina Arkhipova, a yoga specialist, who was head of the mission and architect of St. Petersburg’s Search for Lost Knowledge Program, which holds annual mountaineering events aimed at promoting medical science, said that although “there were considerable breakthroughs in our mission, it would be immature to reveal the exact outcomes with accuracy, pending the ongoing laboratory examinations.”

Arkhipova, who is also a director of St. Petersburg’s Pharaoh Historical Movie Studio, led a team of 45 experts including 14 medical doctors, physicists and yoga enthusiasts to the snow-capped, 4,000-meter high Indian Himalayan province of Himachal Pradesh.

The team paid visits to Tibetan Buddhist monasteries in search of Tum-Mo’s medical secrets, currently on the verge of being lost to posterity because “the last lama who practiced Tum-Mo in that part of the Himalayan Mountains died last year,” leaving scant oral traces of the ancient tradition, Arkhipova said.

However, after visits to about 40 monasteries, monks showed Arkhipova’s team a route across the Kully Gorge, reputed for its unpredictably harsh weather, to the top of the Rotang ridge, one of the rare spots where until recently Tum-Mo was practiced.

However the team did not reach the Rotang because of snow in the middle of the Kully Gorge, blocking the way.

“We resorted to practicing yoga on the ice surfaces beneath the waterfalls in the Rotang Valley, and everything was fantastic even for those who were on such a mission for the first time,” she said

Determined to reach the home of Tum-Mo on the top of Rotang, the adventurers have vowed to return next year.

The team said it had gathered enough material on the technique during the recent trip to warrant continued research.

In 2002 research into the medical benefits of Tum-Mo was carried out by Herbert Benson, associate professor of medicine at the Harvard Medical School and president of the Benson-Henry Institute for Mind Body Medicine at Massachusetts General Hospital in Boston, U.S., reported the Harvard Gazette.

Benson was quoted as saying that studying advanced forms of meditation such as Tum-mo “can uncover capacities that will help us to better treat stress-related illnesses” but that more research into the technique was required.

Benson has been researching Tum-Mo since 1979 when the Dalai Lama gave his blessing on a trip to Harvard University, reported the Harvard Gazette.