Calming your negative thoughts through mindfulness

Taipei, Taiwan -- Our worries. They're crescendoing like the finale of Beethoven's "Ninth": Bailouts, buyouts. Recession, depression. Enter the meditative practice of mindfulness. 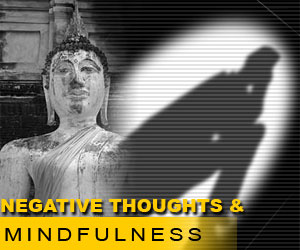 Born of Buddhist roots, it's increasingly recognized as a measure to calm the mind's chatter and elevate the brain's thinking and organizational processes. Even the medical mainstream is taking note - the Sept. 17 issue of the Journal of the American Medical Association had a piece titled "Mindfulness in Medicine."

"The uncertainty of tomorrow creates a lot of the angst or discomfort," says Scott Rogers, director of the Institute for Mindfulness Studies in Miami Beach.

Mindfulness is built around the premise of disengaging from overly emotional responses and extraneous thoughts that clutter the mind's ability to think clearly. By using techniques such as breathing, visual imagery and meditation to slow down and focus on the present, the theory goes, a person can tap into a higher level of awareness. The more acute awareness is the byproduct of more active brain waves brought on by meditation, studies have shown.

Simply put, it's going from worrier to warrior, says Rogers, 45, a lawyer who conducts seminars for other lawyers and school groups.

Dr. Patricia Isis runs a mindfulness seminar at South Miami Hospital and says her weekly classes fill immediately. "People are stressed to the max," she says. "Mindfulness is an opportunity to be awake and aware as much as possible," she says.

The mindfulness practice has ties to sports psychology, says Dr. Janet Konefal, the assistant dean for complementary integrative medicine at the University of Miami. "Most of the research about this self talk comes from coaches and psychologists involved in sports," she said. "They're interested in how athletes talk to themselves and how that can make the difference and be cutting edge."

Olympics swimmer Michael Phelps, for one, is renowned for envisioning every race before he dives into the water. He focuses on the time he wants to achieve - down to the hundredth of a second - and the exact stroke count per lap he needs to achieve his goal. He credits this focus with winning a gold medal in the 200-meter butterfly at the Beijing Olympics last month despite a goggles failure that impaired his vision.

There is a growing body of evidence that this type of mental discipline and meditative practice can carve new pathways in the brain. It's a concept called neuroplasticity and it's just the opposite of what scientists had believed for years - that the brain's nerve cells were set in childhood and didn't change.

A 2005 study published in the Proceedings of the National Academy of Sciences measured the brain waves in a group of Tibetan monks schooled in Buddhist meditative practices from centuries ago. The researchers at the University of Wisconsin found that when the monks meditated - especially the ones most skilled in meditative practices _ their brain waves, as measured by brain-scanning machines, recorded much greater and more powerful activity than previous standards of healthy people.

Andee Weiner, a grandparent and mother of three grown children in Miami, turned to mindfulness after a heart attack in 2006. She enrolled in an eight-week Mindfulness-Based Stress Reduction course at South Miami Hospital, a program based on the teachings of Kabat-Zinn, author of "Full Catastrophe Living: Using the Wisdom of Your Body and Mind to Face Stress, Pain, and Illness".

"It's one of the best things I've done for myself. A year and nine months later, I can't believe how it's enhanced my life, said Weiner, 59.

Weiner cites several examples of how mindfulness works for her: "I can be in traffic and instead of having nasty thoughts I can bring myself into a state where I focus on my breathing and those thoughts leave me. Or, I'm sitting in a doctor's office and instead of getting agitated while I'm waiting, I'm not agitated, my blood pressure is not sky high and I let go of a lot of baggage."

Another technique taught at the South Miami course centers on mindful eating. Students are given a raisin and instructed to imagine every aspect of how that raisin landed in the box _ before placing the fruit on their tongue. They go through same process with its taste and feel in the mouth. "With mindful eating it's helped me maintain weight loss. I'll take the time to sit back and think of the choice of what I'm eating. It's helping me relax," Weiner said.

Relaxation is the goal, experts says. "With the economy the way it is, and the stressors everyone is under, once you adopt a mindfulness practice, anyone you encounter benefits from it," Isis says.