New York, USA -- When you're upset or depressed, should you analyse your feelings to figure out what's wrong? Or should you just forget about it and move on? 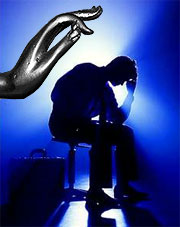 New research suggests a solution to these questions and to a related psychological paradox: Processing emotions is supposed to facilitate coping, but attempts to understand painful feelings often backfire and perpetuate or strengthen negative moods and emotions.

The solution is not denial or distraction. According to University of Michigan psychologist Ethan Kross, the best way to move ahead emotionally is to analyse one's feelings from a psychologically distanced perspective.

With University of California, Berkeley, colleague Ozlem Ayduk, Kross has conducted a series of studies that provide the first experimental evidence of the benefits of analysing depressive feelings from a psychologically distanced perspective. The studies were supported by funding from the National Institutes of Health.

'We aren't very good at trying to analyse our feelings to make ourselves feel better,' said Kross, a faculty associate at the U-M Institute for Social Research (ISR) and an assistant professor of psychology. 'It's an invaluable human ability to think about what we do, but reviewing our mistakes over and over, re-experiencing the same negative emotions we felt the first time around, tends to keep us stuck in negativity. It can be very helpful to take a sort of mental time-out, to sit back and try to review the situation from a distance.'

This approach is widely associated with eastern philosophies such as Buddhism and Taoism, and with practices like Transcendental Meditation. But according to Kross, anyone can do it with a little practice.

'Using a thermostat metaphor is helpful to many people. When negative emotions become overwhelming, simply dial the emotional temperature down a bit in order to think about the problem rationally and clearly,' he said.

Kross, who is teaching a class on self-control this fall at U-M, has published two papers on the topic this year. One provides experimental evidence that self-distancing techniques improve cardiovascular recovery from negative emotions. Another shows that the technique helps protect against depression.

In the July 2008 issue of Personality and Social Psychology Bulletin, Kross and Ayduk randomly assigned 141 participants to one of three groups that required them to focus (or not focus) on their feelings using different strategies in a guided imagery exercise that led them to recall an experience that made them feel overwhelmed by sadness and depression.

In the immersed-analysis condition, participants were told, 'Go back to the time and place of the experience, and relive the situation as if it were happening to you all over again... try to understand the emotions that you felt as the experience unfolded... why did you have those feelings? What were the underlying causes and reasons?'

In the distraction condition, participants were asked to think about a series of non-emotional facts that were unrelated to their recalled depression experience. Among the statements: 'Pencils are made with graphite' and 'Scotland is north of England.'

After the experience, participants completed a questionnaire asking how they felt at the moment, and wrote a stream-of-thought essay about their thoughts during the memory recall phase of the experiment.

Immediately after the session those who used the distanced-analysis approach reported lower levels of depression than those who used immersed-analysis, but not distraction. Thus distraction and distanced-analysis were found to be equally effective in the short-term. Participants then returned to the lab either one day or one week later. At that time, they were asked to think about the same sad or depressing experience, and their mood was reassessed.

Those who had used the distanced-analysis approach continued to show lower levels of depression than those who had used self-immersed analysis and distraction, providing evidence to support the hypothesis that distanced-analysis not only helps people cope with intense feelings adaptively in the short-term, but critically also helps people work-through negative experiences over time.

In a related study, published earlier this year in Psychological Science, Ayduk and Kross showed that participants who adopted a self-distanced perspective while analysing feelings surrounding a time when they were angry showed smaller increases in blood pressure than those who used a self-immersed approach.

In future research, Kross plans to investigate whether self-distancing is helpful in coping with other types of emotions, including anxiety, and the best ways of teaching people how to engage in self-distanced analysis as they proceed with their lives, not just when they are asked to recall negative experiences in a laboratory setting.