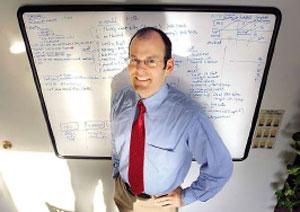 Dr. Judson A. Brewer has conducted studies with alcoholics and cocaine addicts and now is beginning research to help people quit smoking.

Brewer is medical director of the Yale Therapeutic Neuroscience Clinic, based at the Veterans Affairs medical center. What he teaches is mindfulness, a concept rooted in Buddhism.

“Mindfulness has a two-component definition for the scientific community,” Brewer said. “First, it’s maintaining your attention on the present moment, and the second is you’re bringing to that a nonjudgmental attitude of acceptance and curiosity.”

Addicts use their drug or substance of choice to relieve stress and tension, Brewer said, and that behavior becomes habitual. “Everybody forms habits based on their prior experiences,” Brewer said. “Those habits inform how we approach each new situation.”

What the clinic’s training does is help the addict break the cycle of turning to a drug to relieve the seemingly unbearable feelings created by stresses such as loneliness or anger. Brewer compares it to surfing; the wave represents a feeling like anger; we wipe out to get rid of the feeling.

“The secret is, your anger’s going to go away anyway, if you can just ride that wave,” even though you fear that you’re going to wipe out in the surf, Brewer said.

The knowledge that the addict is not a slave to the drug enables him or her to resist the urge more easily each time. “That adds this huge element of openness — when you know how something works there’s much more freedom to not react to it.”

The experienced Buddhist knows that anger and other stresses will go away. “Where Buddhism comes in, it says everything is impermanent,” that life is change, Brewer said. That includes suffering.

Buddhism is based on the Four Noble Truths. The first is that life is suffering, and the second is that we cause our own suffering through our ignorance and attachments to our desires. The third truth is that we can overcome those desires and the fourth is to follow the Buddhist path to enlightenment.

Mindfulness training is the clinic’s version of that path, in which people are given exercises which Brewer summed up by the acronym SOBER: Stop; Observe the body, emotions and thoughts; Breathe and notice your breath; Expand your awareness to other phenomena; and Respond in a healthy way.

Trainees are also taught various kinds of meditation, including one called loving kindness meditation. “You just practice saying certain phrases over and over: may you be happy, may you be healthy, may you be free from inner and outer harm, may you live with ease.”

The exercises develop concentration, Brewer said. “It also helps us soften our often very firm boundaries between ourselves and other people.” That in turn helps make us more nonjudgmental, one of the basic tenets of mindfulness.

The studies are too new to have yielded definitive results, but Brewer said researchers have compared how well mindfulness reduces stress with the more traditional cognitive behavioral therapy. Mindfulness training did at least as well in decreasing the fight-or-flight response, in modulating heart rate and breathing.

Brewer said researchers have not proven a connection with the physical dependency that drugs create. “We know mindfulness can affect physiologic response ... but we don’t know how it’s doing it.”

Also, addictions are incredibly difficult to treat. Smokers typically try five to seven times before they’re successful, Brewer said. But even if mindfulness doesn’t turn out to have greater success than more traditional techniques, it also does no harm, with no drugs and no negative side effects.

While the marriage of religion and neuroscience may seem contradictory, Brewer said Buddhism may be the most appealing religion to the scientific mind. It does not have a traditional concept of God and practitioners are encouraged to learn from experience, not from faith. He practices the Theravadan school that focuses solely on the Buddha’s teachings, rejecting traditions and beliefs added on by later branches.

“It draws a lot of scientists because it’s very rigorous and very experiential,” he said.

Brewer first tried Buddhist meditation in graduate school, he said, and it guided him into his specialty. Following the Buddhist precept of not harming any creature, he stopped doing animal research, “and the only thing left is people.”

His research on people is not harmful, either, and Brewer believes that the philosophy that has helped relieve his stress can help others conquer the dangerous addictions that threaten their health and their lives.

The clinic is seeking volunteers for its smoking-cessation study, which pays $10 per session and $100 for completing the 10-session course. Call the clinic’s hot line at 376-7059. More information is on the Web site at www.ytnc.yale.edu.
TOP