Boulder, Colorado (USA) -- The word "permaculture" unites the concepts of permanence and agriculture. It begins with personal commitment toward protecting the Earth, then continues with action to make it happen. And, it's the theme of an Earth Day celebration that will feature a new permaculture greenhouse on the campus of Naropa University, in Boulder, Colorado. 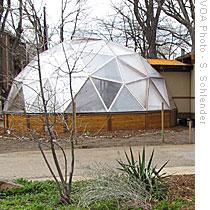 Taking care of the Earth and the community

A permaculture life - according to Marco Lamb, who teaches the permaculture classes at the Buddhist-inspired school - starts with absorbing a set of ethics, and its agricultural philosophy follows a three-part code.

One of his students explains that even the soil here fits the permaculture ethic.

"It is native to this plot [of land], and it's mixed up with leaves that have been composted from Naropa, so it's a Naropa native soil," she says as she smoothes the newly planted seed beds outside the greenhouse with a garden rake.

In these organic garden plots, Lamb says they've planted perennial flowers plus early season, hardy vegetables that can withstand snow and frost, "kales and chard and things like that." They are hoping the plants will sprout in time for the greenhouse dedication on Earth Day.

A greenhouse that generates energy

The greenhouse that will be the centerpiece of the ceremony is a 44-square-meter dome-shaped, window-filled structure. It shines like a diamond in the afternoon sun, and Lamb says it captures enough solar warmth for tropical plants, like passion flowers, to flourish inside. There are also plants used in Ayurvedic medicine.

"There's an herbal studies class on campus, and they wanted some Ayurvedic plants to grow in here," he explains, adding that there are also plans for fig and citrus trees.

"One of the amazing things about this greenhouse is there's no supplemental heat in this greenhouse. This is our first net-zero energy structure on campus," Lamb says proudly. A local company, Namaste Solar, donated photovoltaic cells, which supply all the electricity the greenhouse needs, with extra energy to share.

The greenhouse passive energy system includes a large water tank which collects solar heat during the day, then gives it off throughout the cool night. In addition, Lamb explains, the tank will produce food and income.

"The students are working on an aquaculture system in here that will have fish and fresh water shrimp. And all the nutrients that come off the fish, the so-called fish poop, is attached to a pump to water our greenhouse," he says. "So our greenhouse, actually, eventually will become fertilizer self-sufficient. We won't have to import fertilizer, because we feed the vegetation to the fish. The fish produce manure that gets fed to the plants. So we only have to replace a tiny amount of what we take out of the cycle."

A student-conceived and student-led project

Lamb says that creating the greenhouse has fostered a stronger student community. In fact, he notes, the idea came from students in his permaculture class. Three years ago, they decided to grow food, right on campus. So they built ramshackle, glass-covered planting boxes to keep a few plants warm in the middle of winter.

"They were successful in growing spinach and kale and chard and lettuces, right in the middle of February into March. And they got really excited and they said, 'But, we want to grow more.'"

So they talked with Naropa administrators, who gave them seed money for a greenhouse. They raised more from the local community, worked with architects, and each semester, Lamb says, his class tackled another part of the greenhouse project.

"And now this class really gets the icing on the cake, 'cause they got to plant the greenhouse." 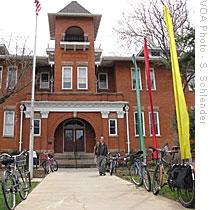 The greenhouse remains a work in progress. Students envision an orchard nearby, on the school's front lawn, plus more improvements in the years ahead. Their goal is a permaculture space that future generations can cherish. And even though the outdoor gardens are newly planted, Professor Lamb is confident that the students' efforts will bear fruit.

"Eventually, you'll hear the sound of fruit dropping," he predicts, "but we just planted, so it's not quite there yet. Right now, if you listen real quietly, you might hear the seeds breaking through the earth."