Looking for peace and quiet

Reflections on seeking solace in some of the world's silent spots

Toronto, Canada -- It's rare to hear nothing, particularly when travelling. We hear the steady hum of jet engines, the clackety-clack of train tracks, the chatter of bustling markets, the honks of cars on busy streets, the cries of gulls on beaches ... 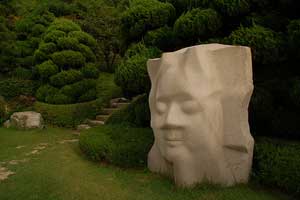 But for those who've stumbled onto silence, it's carved into their memories as a moment that stood apart.

Acoustic ecologist Gordon Hempton calls it "not the absence of anything but the presence of everything."

Hempton insists that silence is a basic human need. Describing himself as a "professional" listener, he has spent the past few years travelling the United States, outfitted with his digital recording equipment and a decibel-measuring sound-level meter in search of silence.

He discovered that it's difficult but not impossible to find, and he remains determined to protect it.

In particular, Hempton is interested in what he calls "one square inch of silence" – an actual place in the Hoh Rain Forest in Washington State's Olympic National Park – and the name of his book detailing his silence-seeking odyssey.

With his pilgrimage in mind, here are some travellers' recollections on where they found silence in a noisy world.

As Hempton reminds us, "silence cannot be imagined ... To experience the soul-swelling wonder of silence, you must hear it."

Head-Smashed-In Buffalo Jump, Alberta: Seven years ago, Amber Nasrulla was working for CTV, travelling across Canada and broadcasting from a different province for 10 days.

She admits that the crew was tired by the time they got to Head-Smashed-In Buffalo Jump, a UNESCO World Heritage Site south of Calgary.

It's so named because the native people would drive bison off the cliff to a community below where the carcasses were cut up.

Still, she was "gobsmacked" by the place.

"It was so silent," she recalls, noting that none of the crew spoke as they simply took the place in. "There was an inner quiet and an outer quiet ... It was magical."

Near Angkor Wat, Cambodia: Like many travellers to Cambodia, Allan Britnell made the trek to Angkor Wat, site of a large temple complex.

"Everyone, including us before we went, thinks the whole area is one temple called Angkor Wat," says Britnell. "But that's just the biggest temple complex in an area stretching across hundreds if not thousands of acres of jungle."

As he journeyed farther away from the main area, he and his partner often found themselves completely alone, "perched on top of a 1,000-year-old temple built in honour of some long-dead ruler we'd never heard of." He admits that "silent" isn't necessarily accurate as there was a "constant din from chattering monkeys," but it "certainly qualified as serene."

Temagami, Ont.: David Masters, who frequently takes groups canoe tripping to the Temagami area with his company Lunatic Adventures, loves the silence of the area, particularly when alone. He notes that you need to be quiet for more than 10 minutes so that nature's "alarm bells" – the birds and animals that signal human presence – have time to settle down.

"After 10 minutes, nature restores itself."

At that point, Masters takes in the old-growth forest, the cliffs, the water. It's an area, he says, that "takes your breath away, which makes you ... shut up."

Red Rock Canyon, Nevada: The last thing Dawn Yager expected to find in Las Vegas was silence. Yet when she and a friend decided one day to drive just 15 minutes outside the desert city, they discovered a path leading to Red Rock Canyon. They parked, then hiked to the popular spot.

"It was a one-hour hike in silence, there and back," recalls Yager. "We didn't say a word. It seemed wrong ... bad manners to Mother Nature. I was very aware that `whoa, there's really no-one here.'"

"Getting there was a journey on its own," he says, noting that he drove 900 kilometres to Matagami, which appears to be the last town on some maps. From there, he says, it was more than 500 kilometres north along James Bay Rd., then 280 kilometres east on Trans-Taiga highway to an air base in LG4. Another 200 kilometres by float plane took him to an outpost camp. His reward?

"The only sound to be heard was a marten scurrying up a scrubby spruce tree outside our camp, which was startlingly loud in the dead silence of the night."

Griffith Island, Nunavut: Tony Armstrong was filming a documentary in the Arctic, "trying to get that last great shot."

There was absolutely no noise and, for the first time, the veteran producer, heard his camera.

"It made sort of a whirring sound that was at first unsettling. Kind of like hearing your heart beat," he says.

Little St. Simons Island, Georgia: Just off the southern coast of Georgia is a 4,000-hectare island with a single "eco" resort – what Kathy Nuss calls her "favourite place in the world. You can always find back-to-nature silence."

The resort has no televisions, no radios, and no phones in the rooms. Though people bring their cell phones, Nuss says there's an atmosphere of respect regarding the quiet of the place and people keep their phone conversations quiet and to a minimum.

"They try to protect that peacefulness," she says. "People are hesitant to break the silence."

"The military essentially abandoned the place in 1997," says Greenberg, leaving only a few people on the island. "It's really just you and gooney birds ... If you're looking to find footprints in the sand, just look behind you because they were made only by you."

The Ice Hotel, Quebec City: When Kate Pocock visited the infamous Ice Hotel, "the silence was a complete surprise," she says. "When you're lying in bed on your block of ice covered with a mattress and caribou furs, with a candle glowing for light it's like being in a cocoon with the world and all its noises completely shut out."

Yellowstone National Park, Wyoming: It was mid-January and the air was bitter cold and still. I stood, together with seven others in the breaking dawn, alert to the sounds of wolves, of whom we were hoping to catch a glimpse.

For a full four minutes, we listened. No words. No howls, at least not then. But while the group was hoping to spot wolves, we were all struck by the silence.

"When," our guide finally spoke, "was the last time you heard nothing?"