Zen in their bedside manner

At New York's Beth Israel Medical Center, Buddhist chaplains offer prayers, meditation, massage and other assistance to the sick. 'We focus on listening,' one says.

New York, USA -- It was 8 a.m., and the subject was death. A 55-year-old man was wasting away from lungcancer and cirrhosis. His weight was plummeting and his brain was swelling. But he was in denial, refusing to discuss hospice care or consider a "do not resuscitate" order. 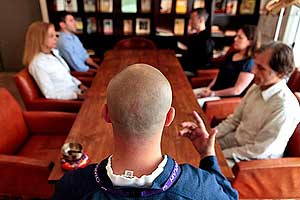 << Nicholas Roberts / For The Times
Koshin Paley Ellison, foreground, a Buddhist chaplain at Beth Israel Medical Center in New York, leads a meditation session at the Continuum Center for Health and Healing.

A bright pink vase filled with yellow mums sat near the window, belying the grim task facing the healthcare workers at Beth Israel Medical Center who had clustered around a conference table.

"This has been really sad," said the Rev. Robert Chodo Campbell, a large man with thick brows who was wearing what appeared to be a cross between a judo outfit and hospital scrubs. He told the group that when faced with a similar case in the past, he had decided to disclose his personal battle with alcoholism to the patient -- also an alcoholic -- in hopes of spurring a conversation that might help ease the man's mental anguish and prepare him for whatever lay ahead.

"Is that a good technique?" asked a doctor, sounding slightly incredulous.

A psychologist interjected. "In this case, it could have been a gift," she said. "Psychologists don't disclose anything. Chaplains operate under a different set of rules."

And Chodo operates under a different set of rules than most chaplains as he spreads the spirit of Buddhism through the halls of Beth Israel, a 1,368-bed medical center in Manhattan. "If it seems appropriate in the moment and one is sure of one's motives -- the well-being of the patient -- then why not?" the Zen chaplain asked.

According to the American Hospital Assn., about 68% of public hospitals have a chaplaincy program. But few have Buddhist monks, and none compares with the program at Beth Israel -- where more than 20 Buddhist chaplains and chaplains-in-training offer bedside meditation, interdenominational prayers and other assistance to pregnant women, dying cancer patients and even stressed hospital workers.

"There is one rabbi and two Catholic priests. They're great people, but the rabbi sees Jewish patients. The Catholics anoint the sick. Then there's everybody else," said the Rev. Koshin Paley Ellison, co-founder with Chodo of the New York Zen Center for Contemplative Care.

Last year, Chodo and Koshin began bringing students into the hospital as part of the country's first Buddhist chaplaincy training program accredited by the Association of Clinical Pastoral Education. "We're really trying to create a cultural shift," said Koshin, who like Chodo uses the name given him when he took his vows to become a Buddhist priest.

Advocates say the availability of alternative treatments is crucial at a time when millions of Americans are struggling to pay for healthcare. Instead of relying on drugs and hospitalization, the Zen center encourages stress- and pain-relief through meditation, breathing exercises or simple conversation. Even if such methods cannot provide a cure, they can make patients more comfortable. And the Zen chaplains are able to spend more time with patients, time that busy doctors and nurses often cannot spare.

"We focus on listening," said Bob Allen, a chaplaincy student who has spent much of his training time on Beth Israel's oncology floor.

Not everyone, however, has welcomed him.

"I just started eating!" Allen recalled one patient yelling when he entered his room on a recent day. "I'm Jewish! Get out!"

In the tranquil manner that is pervasive among the Buddhist chaplains, Allen put a rosy spin on the patient's reaction. For someone facing death, throwing an unwanted visitor out of the room "can be empowering," Allen said. So if it made the sick man feel better about his situation, that's a good thing.

Some doctors too are skeptical about so-called integrative medicine, the melding of alternative care with traditional Western medicine.

Teaching relaxation and pain management is good, said Dr. Bruce Flamm, an obstetrician-gynecologist at Kaiser Permanente in Riverside, who has been an outspoken critic of studies suggesting prayer and spiritualism can heal the sick. But, he said, encouraging patients to pursue "kooky" approaches with no scientifically proven benefits would be a problem.

Flamm said integrative medicine programs reflected the competitive nature of the healthcare industry. Some mainstream medical centers, he said, have introduced alternative approaches in hopes of "trying to recapture some of those patients that are veering off."

"You can get your chemotherapy . . . and also get your acupuncture and therapeutic touch and reiki healing," Flamm said, drawing a picture of one-stop shopping for the ill. "The question is, is that really ethical?"

Beth Israel's Zen chaplains say they are careful in approaching patients and would never dream of countermanding a doctor's advice. But their differing approaches are clear.

During one meeting at Beth Israel, Koshin suggested that a severely diabetic 63-year-old woman who refused insulin might benefit from a visit to the alternative-care facility that is affiliated with the hospital and offers treatments such as herbal medicine and leeching.

A doctor disagreed. "She needs really good medical care to get her diabetes under control," the physician said.

So Koshin gently pushed his own theory that the woman might become "more compliant" if she received some sage advice from practitioners at the holistic center.

The discussion was left at that.

During a recent round of visits on the oncology floor, Allen, the chaplain-in-training, knocked lightly on patients' doors before entering. He moved silently into their rooms and sat beside them, ignoring TVs blaring pop music or squeals from "The Price is Right."

On this day, the patients included a Burmese man with nasal cancer who had requested time with a Buddhist chaplain. The patient appeared weighed down by the white sheets atop his slender frame. "You seem very tired. Do you feel bad today?" Allen asked the man, who requested that his name not be published. The patient nodded. He was too sick to eat, but he wanted to practice breathing exercises to relieve his pain.

He struggled to sit up in bed. Then he closed his eyes as Allen coached him in a soothing voice. "Take a nice, deep, cleansing breath," Allen said. "Blow out all that toxin from your face, your nose, your eyes, so you can bring peace and calm to yourself."

Next, Allen visited Victoria Exconde, who was facing breast cancer surgery. A Roman Catholic from the Philippines, Exconde broke down in tears as she discussed her condition and the difficulty of going through it without her late husband by her side.

The two then recited a Christian prayer together.

"You don't have to call me father," Allen replied good-naturedly as he got up to leave.

Supporters of the Zen chaplains program say the monks' presence brings a calming influence to the often frenetic hospital floors, and that patients, for the most part, are open to them.

"I think a lot of it has to do with the fact that a lot of our patients don't really know what a Buddhist monk does," said Terry Altilio, a social worker in Beth Israel's palliative-care department, which focuses on relieving suffering of seriously ill patients. "For a lot of patients, there's a curiosity and an openness you don't necessarily see with rabbis, priests, etc."

The Zen chaplains do not limit their services to patients.

Koshin recently accompanied a Catholic priest to tend to a couple whose infant had died at the hospital, explaining that "the priest didn't want to go alone because he'd never been with a dead child."

During morning rounds, when medical teams gather to discuss their cases, the chaplains sit in. In the case of one 30-year-old Chinese man with cancer, Chodo advised that they needed to be careful because in Chinese culture, "you don't normally discuss death in front of the patient."

Most of the patients, whose harsh lives show in their tired eyes and bodies, have spent time in prison or on the streets.

But here they were, sitting in a dark room, chanting the lotus sutra while having their heads massaged. As Chodo's soothing voice filled the room, their chatter gave way to dreamy murmurs.

"When I meditate, it takes me to some beautiful places, even though I'm from Brooklyn," said Kevin, one of the center's residents, ticking off his visions of paradise: Paris, Rio, Jamaica.

George, another resident, asked everyone to remember the 228 souls lost when an Air France jet vanished over the Atlantic Ocean. The crash was a reminder of how life can be cut short without warning, Chodo said, urging those around the table to be kinder to themselves each day -- perhaps by having one less cigarette or doughnut, or making one less trip to Starbucks.

Then he cleared the room so he could meet privately with Rafael, an AIDS patient whose clothes hung from his once-buff frame. Rafael wept as he spoke of his fiancee in the Bronx, who no longer visited or returned his calls.

Chodo held his hand and simply listened, saying nothing.

After a few minutes, Rafael thanked Chodo and shuffled back to his room.