Why do Buddhist monks sleep upright?

A group of Buddhist monks recently emerged from four years in isolation in a retreat in Scotland, having spent their nights sleeping in an upright position. Why?

Dumfriesshire, Scotland (UK) -- The monks at the Samye Dechen Shing Buddhist retreat in Dumfriesshire are supposed to sleep upright in a "meditation box". For less than five hours. 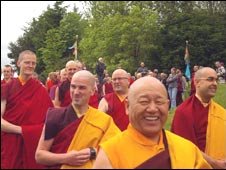 We've all fallen asleep in armchairs, but it seems a different proposition to sit bolt upright every night for four years.

According to Buddhist monks, it is possible to sleep that way, but it's not for the uninitiated.

"If somebody is diligent they make a lot of effort to sit upright," says Ani Lhamo, secretary to the abbot at the Samye Ling monastery, which owns and runs the retreat.

"The aim is definitely to sit upright and reduce the need for sleep. If the person is strongly motivated and healthy and strong there is no reason why not."

For those spending the four years on retreat the aim is to spend as much time meditating as possible.

"If possible, if somebody is well-attuned to that kind of thing, they can develop the amount of time eventually to be able to use the sleeping time [for meditation]. Also if you are more upright when you sleep, when you wake up you haven't slept so deeply, and it is easy to wake up quickly and get going."

Bedtime at the retreat is 11pm and the gong goes at 3.45am when the monks are supposed to start praying and meditating.

Of course, we don't need to be supine to be asleep.

"We can sleep in a chair. We can sleep standing up but we are not as good at it as other creatures, for example birds," says Derk-Jan Dijk, professor of sleep and physiology at Surrey University.

Soldiers on sentry duty are among those who have been known to take 40 winks standing up, but if we enter the deeper, dreamy phase of sleep it starts to become difficult to remain upright.

"In Rapid Eye Movement sleep we lose the tone in our muscles which makes it difficult to stand up or even sit up," says Prof Dijk.

Dr Neil Stanley, sleep expert at the Norfolk and Norwich hospital, says sleeping upright may be easier for those who have a different concept of comfort.

"It is possible. In order to sleep you need to be safe and comfortable. We all know we can nod off in front of the TV. When you go into dreaming sleep you lose all muscle tone.

"But I imagine [the monks] are sitting in a posturally correct way and are not going to slip and slither off their chair and that they could have a perfectly good night's sleep."

It's not easy to verify the sleep patterns of the monks. They are in individual rooms at the retreat, and although the gong goes at 3.45am nobody comes around to check they are awake.

Prof Dijk says there have been studies where professed short sleepers, when observed over 24 hours, turned out to be getting more sleep than they had stated.

But at the Buddhist retreat it may all just be a question of dedication.

"In the beginning I had a lot of sore knees," says Ani Lhamo. "It suited me better than lying in a bed in the end."

But for anybody thinking of starting to sleep upright, and only for a brief period, there are dangers in short duration sleep.

"There is a large body of epidemiological literature suggesting that there are associations between short sleep duration and a number of negative health outcomes including cardiovascular disease," says Prof Dijk.

"If you are artificially constraining sleep that can cause problems - heart disease and depression," says Dr Stanley. "That may be taken care of by the fact that these people are meditative - they don't have the stresses of 21st Century living to contend with in their lifestyle.

"I wouldn't have thought that poor sleep is going to be a huge, huge problem for them. But it isn't recommended for the man in the street."