HYDERABAD, India -- Philosophy and advanced science can often merge, to the point that they become indistinguishable. At an eclectic gathering comprising young college kids, 30-something professionals and senior citizens, this was the message that came from senior Buddhist monk, Geshe Nyma Tashi on Sunday morning. 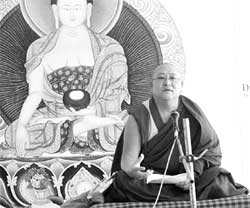 << Buddhist monk Geshe Nyma Tashi delivers a talk on ‘Buddhism and Science’ at the Chitramayee State Art Gallery at Madhapur.

The event, held at the Chitramayee State Art Gallery at Madhapur saw the monk and scholar speak on the issue of Science and its relationship with Buddhist philosophy.The organising committee, which comprised of the Buddhist delegation from the Tibetan Buddhist Meditation and Study Centre at Bengaluru were in a tour of Hyderabad to promote their recently established foundation in Hyderabad.

The Dharma Megha Foundation in Hyderabad, established in May 2009 is presently, according to spokesperson Darima Daribazaron, “in the process of strengthening the bond of Buddhism in Andhra Pradesh.” She explained, saying that “the State was one of the major sites of Buddhist culture and learning since the time of Acharya Nagarjuna, and thus has indelible ties with Buddhist philosophy.”

The foundation, in this regard would be conducting conferences, meetings with scholars and meditation workshops open to the public, Daribazaron added.Speaking on the occasion, Geshe Nyma observed that Buddhist philosophy at its core has had numerous similarities with scientific study of modern times.“

The idea of structural theory is similar to the Buddhist notion of all events and objects beings linked to each other,” he said.

Giving an interesting twist to conventional religious doctrine, Geshe Nyma said that “contradictions in scientific theory, much like debate in philosophy is always welcome in the scheme of Buddhism, since it encourages thought and therefore progress.”

Though Quantum Physics might apparently have little to do with Buddhist philosophy, the monk explained by saying that “the idea that things like time and space as not fixed, absolute has moved it to the realm of philosophical thinking.” Moving on to molecular physics, Geshe Nyma noted that “some Daribazaron of the earliest Buddhist scriptures had theorised on the atomic structure of matter, which had then branched off into the idea of existence and nothingness at later times.”

Delving into psychology, the Buddhist scholar observed that “while modern psychology and neuro-science has established the fact that the human mind works at multiple levels – the conscious, the subconscious and the unconscious, the idea toes the line with the Buddhist notion of chitta and siddha, that of the conscious mind and the ‘settled’ mind that may be roused through meditative practices.”

He concluded his talk by noting that by exploring the tenets of philosophical thinking and scientific study, “much can be uncovered about human knowledge and the world we exist in.”