Beijing, China -- The first Chan-tea Culture Festival at the 1,700-year-old Tanzhe Temple in Beijing wrapped up Monday. The two-month long event attracted a large number of tourists and was aimed at helping people understand the unique Chan-tea culture that has existed in China for over 1,000 years. 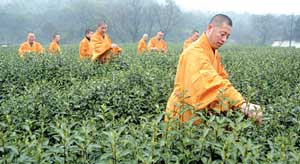 "Chan-tea is a Buddhist tea ceremony and is used to enlighten Buddhists and reveal the truth about Buddhism," explained Liu Junxian, a tea culture expert.

Tea drinking has always been part of the history of Tanzhe Temple and can be traced back to the Western Jin Dynasty (265-316) when the temple was first built. At the time, the monks would pick tea leaves in the mountains behind the temple, dry them and make them into drinkable tea. The beverage proved to help the monks during long meditation sessions and became part of their daily ritual.

The long history of drinking tea at Tanzhe Temple saw the monks and masters gradually combine their understanding of Chan Buddhism with tea drinking, forming the Chan-tea culture of Tanzhe Temple.

"Chan" in Chan Buddhism means"meditation" and is an essential element of the religion. Chan Buddhists believe that meditation is the way to achieve enlightenment and as two of the most important elements of meditation are mindfulness and concentration, a clear and clean mind is required. Tea, with its bitter flavor and cooling nature, is considered to aid in such a calm mind. The ritual of drinking tea not only satisfies the monks' needs to keep alert during meditation but also complies with Chan Buddhism's requirement for serenity, especially in the mind.

Chan Buddhism also emphasizes simplicity, a basic lifestyle and nature. The monks consider that indulgences and luxuries are no more valuable than those that can stimulate the mind and enrich life. The simple elements of tea echo the requirements of not seeking fame or wealth, but living a frugal life with a peaceful heart.

According to the doctrines of Chan Buddhism, enlightenment only happens to those already awakened. One has to achieve this awakened stage with his own efforts. The sensation of drinking tea, bitter at first but with a sweet aftertaste, is exactly the message that Chan Buddhism tries to convey; that life can be bitter at the beginning but sweet after effort and dedication.

Due to the similarities of Chan teachings and tea, Chan-tea at Tanzhe Temple has transformed from being simply a refreshing drink to a way of cultivating moral character and nourishing nature. Drinking tea is today an inseparable part of Buddhism activities at the temple.

"The essence of Chan-tea culture in China can be summarized into four words, 'upright, integrity, harmony and elegance' and the functions of Chantea culture is to 'give thanks, learn to forgive, share with others and make friends,' all of which are in accordance with the spirit of Chan. That's why tea and Chan are closely integrated and Chan-tea has seen huge development in China," explained master Jinghui of Bailin Temple, Hebei Province.