Montreal, Canada -- ZEN meditation helps lower sensitivity to pain by thickening a part of the brain that regulates emotion and painful sensations, according to a study published recently. 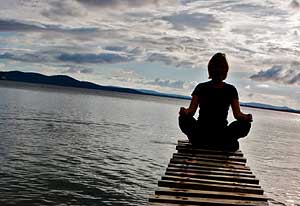 University of Montreal researchers compared the grey matter thickness of 17 Zen meditators and 18 non-meditators and found evidence that practising the centuries-old discipline can reinforce a central part of the brain called the anterior cingulate.

"Through training, Zen meditators appear to thicken certain areas of their cortex and this appears to underlie their lower sensitivity to pain," lead author Joshua Grant said in a statement.

Building on an earlier study, the researchers measured thermal pain sensitivity by applying a heated plate to the calf of participants.

This was followed by scanning the brains of subjects with structural magnetic resonance imaging (MRI).

The MRI results showed central brain regions that regulate emotion and pain were significantly thicker in meditators compared to non-meditators.

The study was published in a special issue of the American Psychological Association journal, Emotion.

In the previous study, the researchers recruited Zen meditators with more than 1,000 hours of practice and non-meditators and measured their respective tolerance to pain.

Several of the meditators tolerated a maximum 53°C produced by a heating plate. They appeared to further reduce their pain partly through slower breathing: 12 breaths per minute versus an average of 15 breaths for non-meditators.

"Slower breathing certainly coincided with reduced pain and may influence pain by keeping the body in a relaxed state," Grant said in the earlier study.

Ultimately, Zen meditators experience an 18% reduction in pain sensitivity, according to the original study.