MADISON, Wis. (USA) -- After hearing about his cutting-edge research on the brain and emotions through mutual friends, the Dalai Lama invited Richard Davidson to his home in India in 1992 to pose a question. 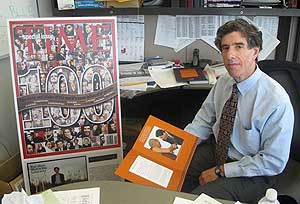 << University of Wisconsin-Madison neuroscientist Richard Davidson, an expert in how meditation impacts brain functions, poses with a picture of him meeting the Dalai Lama on Wednesday, April 28, 2010 at his office in Madison, Wis. His collaboration with the Dalai Lama made him one of Time's 100 most influential people in 2006, seen left. (AP Photo/Ryan J. Foley)

Scientists often study depression, anxiety and fear, but why not devote your work to the causes of positive human qualities like happiness and compassion? the exiled Tibetan spiritual leader asked.

"I couldn't give him a good answer," recalled Davidson, a University of Wisconsin-Madison neuroscientist.

Since then, Davidson has become a partner in the Dalai Lama's attempts to build a connection between Buddhism and western science. This weekend, the Dalai Lama will mark the opening of the Center for Investigating Healthy Minds at the university's Waisman Center, where more than a dozen researchers will study the science behind positive qualities of mind. Davidson said the center will be the only one in the world with a meditation room next to a brain imaging laboratory.

Davidson's research has used brain imaging technology on Buddhist monks and other veteran practitioners of meditation to try to learn how their training affects mental health.

His team's findings suggest meditation and other "contemplative practices" can improve compassion, empathy, kindness and attention. They support the concept that even adult brains can change through experience and learning.

"He's made some interesting discoveries about meditation, and I think he is doing very good science," said John Wiley, who was university chancellor from 2001 to 2008 and is interim director of the Wisconsin Institutes for Discovery.

Initially, "a significant number of his colleagues around the world were suspicious and thought that it wasn't adequately grounded in hard science," Wiley said. "He's proved them wrong."

The appearance comes as the Dalai Lama has spent more time promoting research into traditional Buddhist meditative practices and urging scientists to help create a more ethical and peaceful world.

Davidson, named one of Time magazine's most 100 influential people in 2006, will appear with the Dalai Lama at scientific events five times this year.

"His relationship with the Dalai Lama lends a great deal of public influence to the hard science that he does," said David Addiss, a former Centers for Disease Control official who now works at the Fetzer Institute, a Michigan nonprofit that gave Davidson a $2.5 million grant.

Yet Davidson's relationship with the Dalai Lama remains controversial. When he invited the Dalai Lama to speak at a 2005 neuroscience conference, dozens of researchers signed a petition in protest.

Some of the criticism appeared motivated by Chinese researchers who disagree politically with the Dalai Lama's stance on Tibet. Others said it was an inappropriate mix of faith with science.

Davidson, who meditates every morning but does not consider himself a practicing Buddhist, has also been criticized for being too close to someone with an interest in the outcome of his research.

Davidson said the Dalai Lama's commitment to science is remarkable for a religious leader of his stature, and notes that the Dalai Lama has said he is prepared to give up any part of Buddhism that is contradicted by scientific fact.

"He also is the first one to point out the limitations of meditation and how it's not a cure all and be all for everything and has very limited effects on health," Davidson said.

Davidson is ready to test his research in real-world situations. The center plans to begin training local fifth-grade teachers next fall to cultivate skills like patience and relaxation among their students.

"We're really intrigued with his research that shows students can learn how to relax so they can focus more on learning," said Sue Abplanalp, assistant superintendent for elementary schools in the Madison public schools.