London, UK -- The Buddhist relaxation technique used by hippies in the Sixties has been found to make pain less unpleasant and reduce its emotional impact. 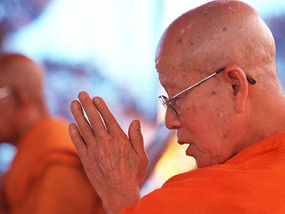 << COMBATING chronic pain could be a case of meditation over matter.

A study at the University of Manchester found that particular areas of the brain were less active as meditators anticipated pain, which was caused by a laser device. Those with longer meditation experience – up to 35 years – anticipated the pain the least.

“This may be why (it) is effective at reducing the recurrence of depression, which makes chronic pain worse.”

Meditation is an increasingly popular way of treating chronic pain such as that caused by arthritis, which affects 10 million adults a year.