Berkeley, CA (USA) -- It's nearly impossible to pay attention to one thing for a long time. A new study looks at whether Buddhist meditation can improve a person's ability to be attentive and finds that meditation training helps people do better at focusing for a long time on a task that requires them to distinguish small differences between things they see. 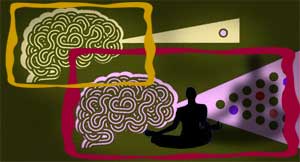 The research was inspired by work on Buddhist monks, who spend years training in meditation. "You wonder if the mental skills, the calmness, the peace that they express, if those things are a result of their very intensive training or if they were just very special people to begin with," says Katherine MacLean, who worked on the study as a graduate student at the University of California - Davis. Her co-advisor, Clifford Saron, did some research with monks decades ago and wanted to study meditation by putting volunteers through intensive training and seeing how it changes their mental abilities.

About 140 people applied to participate; they heard about it via word of mouth and advertisements in Buddhist-themed magazines. Sixty were selected for the study. A group of thirty people went on a meditation retreat while the second group waited their turn; that meant the second group served as a control for the first group.

All of the participants had been on at least three five-to-ten day meditation retreats before, so they weren't new to the practice. They studied meditation for three months at a retreat in Colorado with B. Alan Wallace, one of the study's co-authors and a meditation teacher and Buddhist scholar.

The people took part in several experiments; results from one are published in Psychological Science, a journal of the Association for Psychological Science. At three points during the retreat, each participant took a test on a computer to measure how well they could make fine visual distinctions and sustain visual attention. They watched a screen intently as lines flashed on it; most were of the same length, but every now and then a shorter one would appear, and the volunteer had to click the mouse in response.

Participants got better at discriminating the short lines as the training went on. This improvement in perception made it easier to sustain attention, so they also improved their task performance over a long period of time. This improvement persisted five months after the retreat, particularly for people who continued to meditate every day.

The task lasted 30 minutes and was very demanding. "Because this task is so boring and yet is also very neutral, it's kind of a perfect index of meditation training," says MacLean. "People may think meditation is something that makes you feel good and going on a meditation retreat is like going on vacation, and you get to be at peace with yourself. That's what people think until they try it. Then you realize how challenging it is to just sit and observe something without being distracted."

This experiment is one of many that were done by Saron, MacLean and a team of nearly 30 researchers with the same group of participants. It's the most comprehensive study of intensive meditation to date, using methods drawn from fields as diverse as molecular biology, neuroscience, and anthropology. Future analyses of these same volunteers will look at other mental abilities, such as how well people can regulate their emotions and their general well-being.