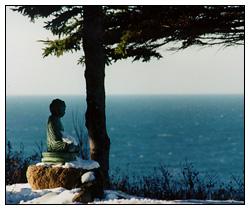 These scientists are looking at how an ancient Tibetan Buddhist meditation practice called Lojong may help reduce stress itself, as well as improve the immune system's response to stress, said Dr. Charles Raison, principal investigator of the study at Emory and CNNHealth mental health expert.

"Lojong" means "mind training," and this specific practice is aimed at making a person more compassionate toward others, including friends and enemies. This is the type of meditation that the Dalai Lama primarily practices, Raison said.

"It tries to train people to rethink and reimagine their relationships with other people," Raison said. "It's a series of visualizations and mental challenges where you use meditation to challenge why you feel the way you do about people."

Participants are taught to look at all people equally as being valuable and important, and then attempt to develop strong feelings of compassion. They first examine compassion toward people they already care about, then toward people about whom they feel neutral, and then finally enemies.

"In its purest form, it's a way of practicing, of learning to become very thankful for your enemies because they help teach patience and caring," he said.

Raison and Geshe Lobsang Tenzin Negi, lecturer in Emory's religion department have been working on methods of testing the effects of this meditation practice on the human body. They have preliminary results from a group of Emory University students as well as a more recent study on teenagers in foster care in Georgia.

In both groups, researchers found that the more a person practices, the more stress-reduction benefits he or she receives. It appears that just going to the six or eight weeks of classes is not enough, however; those who showed the best outcomes had meditated on their own time as well, Raison said. The available data suggest that you can get stress-related benefits from meditating three to four times a week, he said.

"It’s not necessarily something that would require a complete change of life. You don’t have to go off and go to a monastery," he said.

A challenge for both groups - college students and teenagers in foster care - is finding a quiet place to do meditation outside of class, Raison said. In general, the best venues for meditation are quiet places where the person feels peaceful, which may be somewhere outside, he said.

Besides looking at stress responses, the researchers are also trying to measure whether the meditation has a real effect on the participants' behavior. They did a small test of this by having participants wear an electronically activated recorder before beginning and after finishing the meditation interventions,

The recorder is used to evaluate the effect of the study interventions on the participants’ social behavior by periodically recording bits and pieces of ambient sounds from participants’ daily lives. Ambient sounds of the person's daily interactions are recorded.

Preliminary data suggest that indeed the meditation did make participants more compassionate in their interactions, but more study needs to be done to confirm this, Raison said.

The project will, in the future, also look at the effect of meditation on brain structure, by taking images of the brains of participants, he said.