A Buddhist Vision of Life Beyond Consumerism

San Francisco, CA (USA) -- Are there alternatives to consumerism? Other than a dreary alternative such as loss of a job, a prolonged economic downturn or the stealth tax of inflation? 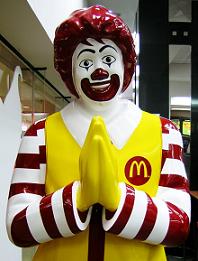 What is it, this consumerism? It's the assiduous promotion of cravings which our economic system, at least until recently, has somewhat satisfied: "Your neighbor has it. You will be happy when you get it. You can have it now on easy credit." The amping up of desire for stuff is so normal here that it's hard to imagine another approach to life.

Recently, I came across an old box with photos of my maternal grandfather and some clippings from his youth. There were already ads when he was young, but they seem so naive, displaying an object for its own sake, not associating it with sexy women, power, speed or species that vehicles are named after.

My grandfather had much less materially than my parents, but as I know from taking long walks with him, telling stories, playing games, helping him build a boat, he was happy. How was that?

I thought of him when reading the new book by Stephen Batchelor, author of the wildly popular Buddhism Without Beliefs. Buddhist practice teaches that life is full of suffering and suffering comes from cravings. The trouble with cravings is that they often can't be satisfied and, when they are, the objects may vanish or degrade. And, in any case, they usually don't "make us happy," or, if so, not for long.

In this view, a system of implanting cravings by sellers who hope to profit by them, of exacerbating desire, would be crazy. The question is, why would you do that? Of course, people need the basics such as shelter, clean air and water, food, clothing, education, health care, the ability to work. But as Joe Dominguez and Vicki Robin asked in their classic, Your Money Or Your Life, to what extent does it serve you to mortgage your life to get more and then more?

The service offered by Batchelor is to get to what he regards as the core of Buddhist practice, free of "accretions" imposed by various Asian traditions. Of course, some westerners are attracted to Buddhism in part by the rich Baroque trappings of the Tibetans, the subtle Theravada traditions of southeast Asia or the spare paradoxes in Zen cultures. But other westerners want a practice they feel is more suitable for a scientific and democratic society.

Having been a monk in two of three Asian traditions (Tibetan and Korean), Batchelor sought what he regards as Buddha's basic realization. In his writing, he even set aside such crucial elements of traditional Buddhism as rebirth and karma, not denying that the founder taught these doctrines, but attributing them to the Hindu world in which he'd grown up and arguing that they aren't necessary to Buddha's genius as expressed in the "four noble truths."

Within Buddhism, Bachelor's heresy is not to do without the concept of divinity (the founder was agnostic about metaphysics), but rather to set aside any realm other than our life on earth and to accept the possibility of death as oblivion. This is a delicate point because the prestige of Tibetan religious leaders, starting with the Dalai Lama, depends in part on the claim to be reincarnations and because the finality of death is almost unimaginable to most of us.

What a waste to obtain the necessities of life, guard against danger, form attachments to other humans and accumulate knowledge, and then poof, it's all gone like photo albums when a house burns down. This would be almost as unthinkable as a process of evolution. What human would design so slow, wasteful and unfair a process? Batchelor's point here would be that the gist of Buddhist dharma practice is being aware of what's here, now, rather than placing hope, without evidence, in a happier life after death.

Insofar as we can see the situation of Gautama, he had been living the life of a prince. His house was not in foreclosure, he was not forced into the life of a wandering ascetic. The "middle way" that he eventually found was not forced on him by the global peak of oil production, by global warming or by economic breakdown. He felt his realization or awakening was superior to the affluent life of his time.

In the phrase of the brilliant British journalist George Monbiot, "nobody ever rioted for austerity." Monbiot acknowledges this political fact in a book called Heat, about a painstaking and ambitious plan for reducing carbon emissions enough to avoid the worst ravages of global warming. A masterpiece of understatement, his phrase conjures the unlikelihood of a parade with placards calling for less affluence; it fails to mention the widespread phenomenon of denial.

I don't know whether the Buddha ever rioted for austerity, but he certainly counseled against arousing rampant desire, especially as a way of life. But what can we do instead? Change comes eventually less from just a critique of a prevailing system than from the building of a new system, of something that doubters can jump to and help in the next stage of building.

In his new book, Batchelor tells his personal story, reaffirms his understanding of dharma practice and offers speculation about challenges that Buddha faced in creating a new way of thinking and acting. This last task is especially tricky, because the writings called the Pali Canon are roughly as far in time from the founder as we from Shakespeare. (Imagine if we had the plays only through an oral tradition.) But Batchelor asks himself, given what we do know, how would a man with Buddha's basic awakening proceed in the world of his time? We'll never know for sure, but a coherent account at least provides an armature on which to build.

To return to the original question: Is there an alternative to consumerism? If the future will be less affluent than the past, for whatever reasons -- we don't know -- will we cling to a system that is failing, or will we have adopted new basic premises? If the latter, what are values that don't depend on having a growing amount of stuff?