Does Buddhism need the supernatural stuff?

As the Dalai Lama is feted at St Paul's, a more low-key Buddhist will debate with a secular Christian the appeal of truth over myth

London, UK -- This week has been bookended with two notable Buddhist events. On Monday the Dalai Lama was presented with his Templeton prize at a ceremony in St Paul's. On Sunday, in a rather more low-key event, Stephen Batchelor and Don Cupitt will be debating with Madeleine Bunting the possibility of religion without supernaturalism at Friends House on Euston Road in London. 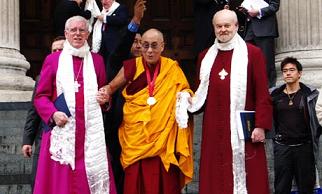 Cupitt is a Christian, of sorts: at least, he's an ordained Anglican priest. But he believes almost nothing of traditional Christianity. "The whole system of Christian doctrine is a somewhat haphazard human construct with an all-too-human history, and … the Bible, when read closely, does not actually teach – nor even support – orthodox doctrine."

Batchelor, similarly, trained for 10 years as a Buddhist monk in Dharamsala, the headquarters of the exiled Dalai Lama, but believes few of the central doctrines of traditional Buddhism. "The kind of secular Buddhism I am interested in … entails a rethinking of Buddhism from the ground up. And what emerges from this reconfiguration of core values and ideas might not look anything like the Buddhism we are familiar with today."

Both men believe in the finality of death. They suppose that this life is the only one we have or can have, and that it is absurd to suppose that personality, in any form, survives the collapse of the body. The doctrine of karma is here reduced to a simple statement of faith that the world is made of braided causal chains: every effect has a cause, and is itself a cause of other effects. There's nothing there about reincarnation.

For both men, the appeal of Buddhism is that it is concerned with truth, rather than myth structures. Follow certain practices and you will come to understand more deeply certain essential truths about the world. It's a method in some ways like the scientific method, but with the inestimable and essential advantage that Buddhism has morality built in. It is an explanation of the moral facts of the world. It makes no sense for them to claim that religions could ever be morally neutral, in the way that people think of technology. They can be, and often are, morally appalling. But they can't be simply neutral. Prayer and contemplation change people irrevocably.

A surprising amount of this is compatible with perfectly orthodox Christianity and, for all I know, Buddhism. The emphasis on truth, rather than faith, is certainly a mark of all the interesting Christian thinkers that I know. But I wonder whether the project of secularising religion like this will ever be more than a minority pursuit.

Watching the ceremony in St Paul's, and listening to the Dalai Lama earlier, I felt the faint proddings of my inner Rupert Murdoch. When he described the Dalai Lama as "a very political old monk shuffling around in Gucci shoes", he was of course defending his imperialist allies in the Chinese government. But he had a point. At the press conference in the crypt of St Paul's we listened to the Dalai Lama explaining that he was perfectly ordinary, just one of 7 billion human beings, yet almost everyone in the room – even Arianna Huffington – addressed him as "Your Holiness". Who, here, was fooling whom?

I don't doubt that the Dalai Lama is a good man, a profound thinker and a skilled statesman. He deserves his prizes. But a huge part of his popularity in the west stems from the deracination of his doctrines. They appear far more secular and far less supernaturalist over here than they actually are when lived out among Tibetans.

More seriously, traditional Buddhist language is full of false friends when translated into English: words that sound the same but mean something very different. When the Buddhist says that the root of happiness is "self-confidence", he sounds like the worst sort of business guru. He answered one question about how he could bear all the suffering in the world by saying that "self-confidence is the key factor. The basis of self-confidence is honest truth. These things I myself learned to be the case. Living as a Buddhist monk, as a practitioner, [I have been] always honest, truthful."

But the kind of self-confidence – indeed, the kind of self – produced by life in a monastery is not going to have much in common with the kinds produced by life in a western economy. One of the central religious yearnings is for platitudes to be true: wouldn't it be wonderful if we could all get along. And since, for the most part, the aspirations of religion towards charity are not realised in the world around us, they need to be cast in terms of another world. That is what supernaturalism does, and it is what the exoticism of Buddhism in the west accomplishes, too. I wish Batchelor, Cupitt, and Madeleine Bunting well. But I doubt their teachings will ever fill St Paul's.