We backed you, and now you do this?

An open letter to Burma’s monks

Rangoon, Burma -- Arabic press Al-Arabiya has called it “the ignored genocide”.  Other news agencies, such as the Iranian based IRNA, liberally uses the term “massacre” in its reports.  While much of the western press have either ignored this issue or downplayed it altogether, the attention in the Muslim world has spawned calls for revenge. Pakistani Talibans have threatened to invoke “jihad” to “avenge crimes against the Muslim Rohingya”. 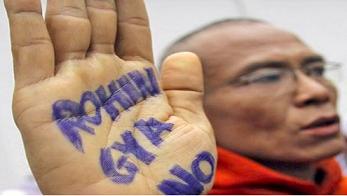 But this “genocide” or “massacre” did not take place in the usual spots that we so often associate it with. It did not happen in the West Bank, neither did it occur in some Iraqi neighborhood or – in the most current context – Syria. It is happening within the fringe of a so-called Buddhist land, the land of the golden pagodas, Burma.

As Buddhists, our natural tendency is to view this tragic conflict between ethnic groups in the Arakan state as the result of a long drawn, political hangover of past actions undertaken by Burma’s military regime.  We may even deny that there is anything religious about the conflict, except that the opposing sides happen to be Muslims and Buddhists.

Buddhists stand proud when we say that we have never been involved in any “holy war”.

But what differentiates between this situation and that of - say, the skirmishes in the south Thailand is that disturbingly the proponents accused of fueling ethnic tensions have been Burmese monks.

Some of these same monks, who incidentally played a vital role in Burma's recent struggle for democracy have been calling on people to shun the Rohingyas, a Muslim community that has suffered decades of abuse. For instance, The Young Monks' Association of Sittwe and Mrauk Oo Monks' Association have both released statements in recent days urging locals not to associate with the group.

Some monks' organisations have even blocked humanitarian assistance from reaching them. One leaflet described the Rohingya as "cruel by nature" and claimed it had "plans to exterminate" other ethnic groups.

In London, monks' leader Ashin Htawara recently encouraged the government to send the group "back to their native land" at an event hosted by the anti-Rohingya Burma Democratic Concern. Ko Ko Gyi, a democracy activist with the 88 Generation Students group and a former political prisoner, said: "The Rohingya are not a Burmese ethnic group. The root cause of the violence… comes from across the border."

Even Noble Peace Prize recipient, and Burma’s most famous prisoner of conscience  Daw Aung Sang Suu Kyi has not been spared by the manner of her “silent” handling of the situation and for failing to speak out. Amal de Chickera of the London-based Equal Rights Trust, said: "You have these moral figures, whose voices do matter. It's extremely disappointing and in the end it can be very damaging."

What is apparent is that nationalist fervor from both sides of the divide, members of the military junta and the pro-democracy opposition, have equally been consumed with protecting their nation’s “amyo” (race/nation), which take the general categorical form of “Buddhist and/or Burmese”  while ignoring that Burma as a territorial entity does not all constitute as Buddhist.

In the wake of this “nationalism”, all apparatus of this “amyo” state, such as the local press, well-known celebrities, scholars and well-respected writers have jumped in the band-wagon to speak out against the Rohingyas. Yet, we may perhaps excuse human failings in irrational behavior driven by heightened sense of nationalism.

But what is disconcerting is the manner some of these Burmese monastics have come out and act the way they did. What has happened to their monastic training? As orthodox Theravada monks, surely the effects of living by the precepts as outlined in the Vinaya would have rubbed off somehow, where even a fleeting thought of violence would have been nipped in the bud?

And what about Burma’s much vaunted Vipassana tradition? Where did all the mindfulness go? The entire situation is ever more disturbing precisely because of these deep seated questions.

Let not be mistaken.  This media is Buddhist to the core. But if we were to live by its name and yet not practice what it values, that label is tainted. That’s not Buddhist. That’s poppycock.

We sympathize with the Burmese people and understand that they will experience pain as they transcend from a closed society to an open democracy. But what they own, which they have owned for a long time - and which many countries don’t have - is a solid spiritual base called Buddhism.

And so we appeal to the monks: Please do the right thing and let the peaceful light of Buddha-Dharma guide you to find non-violent solutions to this problem.  We have backed you in your time of need during the 2007 saffron revolution. Please do not let our efforts be in vain.

Read also:  The Arakan Conflict and Nationalist Threats In Burma