Religious sensitivities no excuse for violence in Muslim world

Ramu, Bangladesh -- Religious sensitivities cannot be used to justify violent attacks. A perceived insult against one’s faith is simply not an excuse for breaking the law. And it is not an excuse to persecute people with different religious beliefs. 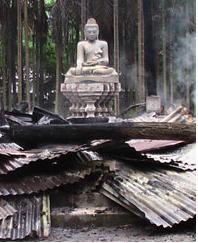 The looting and destruction of Buddhist temples and monasteries in Bangladesh by thousands of Bangladeshi Muslims is the latest example of this dangerous and warped way of thinking.

The mob’s rationale: they were angry about a photo of a burned Koran allegedly posted on Facebook by a Buddhist boy. While these protesters demand respect for their religion, where is their respect for the religion of others?

The Buddhist minority in Bangladesh, a country of 150 million, has traditionally coexisted peacefully within the majority Muslim society; however, there are now fears of further sectarian violence. For its part, the government blamed the attack on Islamists, as well as on Muslim Rohingya refugees from Myanmar.

But the incident is not an isolated one; it comes on the heels of last month’s protests in Muslim countries over the offensive depiction of the Prophet Mohammed in a low-budget film produced by an Egyptian Copt living in the U.S.

This pattern of intolerance is alarming, and should concern religious leaders, as much as governments, because the violence is being committed in the name of Islam, and subverts what the religion actually stands for. Of course, minority religions across vast swaths of the world are subject to attacks, but religious minorities in the Muslim world, including Baha’is, Ahmadis, Zoroastrians and others, are particularly vulnerable because of the failure in many countries to guarantee freedom of religion, as well as the rise of Islamist governments in the wake of the Arab spring.

In Egypt, Christian Copts are concerned about the erosion of their religious rights. In Pakistan, the country’s blasphemy laws were recently used to arrest a Christian girl with mental disabilities who was accused of desecrating the pages of the Koran. A furious mob demanded she be punished. Last year, the country’s national Minister for Minorities – a Christian and a critic of the blasphemy law – was shot dead, In Nigeria, churches in the North have been destroyed by Boko Haram, the militant group trying to establish an Islamic state.

These acts of persecution against should be condemned. Entire communities should not have live in terror that a perceived insult of one’s faith will prompt indefensible acts of aggression.