Kuala Lumpur, Malaysia -- Someone asked me a pretty straight question just a few days ago: Are you Charlie? 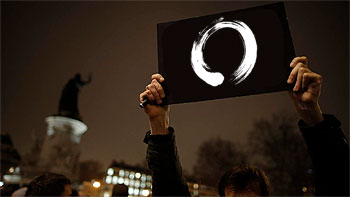 Admittedly events in Paris have seen polarizing views across the globe. On one hand, those supporting Charlie Hebdo say they do it out of respect for "freedom of speech". Doesn't matter if Charlie prints horrendous materials, keeping speech "free" - whatever the cost - from nut-case who wants them shut, is paramount.

On the other hand, those at the receiving end of such hate speech say such nonsense cannot be tolerated. If it means annihilation, so be it.

At a glance, this seems like a classic stage for the clash of two extremes. The Buddha cautioned of being caught at the pole of two ends, between being a nihilist and an annihilist. He famously expounded the middle path, which has become the "raison d'etre" of Buddhism itself.

But to apply the middle path with panache in this instance, without understanding the underlying reasons for such poles to exist, would be wasteful exercise.  Doing so would mean treating it as some form of middle way, a position relative to two extremes. The Buddha taught no such thing, because a fickle treatment of the middle way in this manner means to accept “dualism”, which is anti-thesis to the Dharma.

Indeed, what would Buddha do?

It may be helpful to apply mindfulness in this instance and not get caught with polarized arguments. If we say we are Charlie, we mean to stand in solidarity with the victims (incidentally two of them are Muslims) and/or state our position in support of free speech. Yet, if we observe carefully, it seems that the vast majority who declared "Je suis Charlie" are neither provocative themselves nor has Charlie Hebdo's irreverent nature deterred them.

Yet, if we were to blame Charlie for provocation, for being what they are and for doing what is perfectly acceptable by their society, then this implies justification on the part of the killers. The attackers took out Charlie Hebdo because they assumed that their personal limits of humor and tolerance should be the standard for everyone else. When their action is justified in the name of religion – and precisely because their religion forbids imagery depictions of their holy figures – they too get sympathy. And loads of it too.

The French are liberal people, so liberal that they have welcomed people who are not liberal. Amongst these “not so liberal” communities are those who have been influenced by Salafism - the puritan and literal interpreters of Islamic doctrines.  And so when a master provocateur satirist meets puritan salafi muslim, you get a power keg that is just waiting to go off.

The lesson here for Buddhists is that if we wish to become ambassador of peace in a plural world, we need to juxtapose the Buddha Dharma with an intimate understanding of human relations and events. It is futile and indeed unhelpful by just saying that we abhor violence and implore others to practice loving kindness and compassion. Both Charlie Hebdo and the killers lived in extreme spectrums. We do not, and should not feign escapism by saying we walk the middle path, and hence we avoid the violent endings that befell them.

What we can and should do is to wade ourselves into these seas of extremity, and participate calmly in the observation of the rise and ebb of unskillful actions. After all, the middle path is about the expression of dependent origination (paticcasamupada):  "What this is, that is; this arising, that arises. Through ignorance, volitional actions (or karma-formations) are conditioned.”

Our clear and objective participation (meaning to observe without getting involved in emotions, whether positive or negative) should lead us to concur that – if we as a species want to get along in this little planet – perhaps right speech and right understanding may be more sustainable and healing for the human race.

The clash of civilizations between unfettered liberalism and strict Puritanism is partly facilitated by the ease of travel and communication.  In more medieval circumstances, if there were no internet and cheap flights, the satirists at Charlie would probably be just village cartoonists, serving a small handful of die hard followers. The killers would probably have not heard, or even cared about them.

But the reality is that our world is truly and well wired. Conflicting ideas and imageries will continue to circle the globe unfettered.  Instead of reacting to events, we need the compassion to understand how circumstances arise just as we need to implore the teachings of compassion to elevate suffering. We need to do the right thing, to engage with those in position to act to bring about meaningful development in inter-cultural and religious interactions.

Reaching out compassionately requires right understanding and motivation, without the curbs of ego and self-centeredness. And we need to speak out: in truth, in goodness, in compassion, with the aim to heal and not to tear apart.

Right speech will certainly be that bridge towards building goodwill, understanding and empathy, bringing forth responsible behavior.  And we must be brave and unrelenting in pushing this dictum.

So am I Charlie? I would rather say "Je suis la parole juste".

Kooi F Lim is the Managing Editor of the Buddhist Channel