Singapore -- Thailand is a country where more than 90% of her population identifies themselves as Buddhist. Beside Buddhism, Hinduism, Sikhism, and Catholicism with four Protestant groups categorize as subgroups under it are recognized by the government. 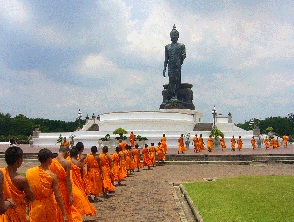 With government registration and recognition come some benefits, such as access to state subsidies, tax-exempt status, and preferential allocation of resident visas for organization officials. The state patronizes and protects Buddhism and all other religions it recognizes.

It allocates funds for temples that are also education institutions. It provides daily allowance for both senior Buddhist monks and Muslim cleric and also subsidizes their travel and health care. It gives out funds for the renovation and repair of temples and mosques.

In other word, even thought Buddhism is the dominant religion, the State treats all recognized religious institutions fairly and equally.

The biggest fear one can get when a dominant religion is declared a State religion, is when its teachings does not recognize and eventually replaces secular laws. It then spread its tentacles and placed a stranglehold on the social fabrics of the whole society itself, controlling and regulating the moral and ethical values and meting out punishments regardless of whether it affects minorities that does not subscribe to its beliefs.

Buddhist teachings like any other religions, tries to influence its followers to do good and be morally and ethically correct according to the interpretation of its teachings. In many other countries, over time, some of these religious rules and teachings are interpreted and incorporated into the nation secular laws or becomes laws in themselves.

Buddhism may have its precepts and interpretation of what is right or is wrong. But it is a religion that have never advocate the meting out of any form of punishments, physical or otherwise on its believers, left alone non-believers. It relies on a person’s kamma and the effect of the law of causation or secular laws itself for such punishments to be effected.

Yet, there are article that harp upon the fact that if Buddhism is enshrine as the state religion it will be ‘a move that would do more harm than good and could serve to antagonize religious discord in the country’.

Pray tell us, how can the move do more harm and sow religious discord in Thailand? Can the situation in the South get any worse if Buddhism is accorded state religion status? How does enshrining Buddhism as the State religion antagonize and sow discord when the declaration itself would not infringe on minority rights or intrude into their private
lives? Note that even though Buddhism is the dominant religion and is a monopoly in Thailand, its teachings do not advocate the imposition of its values nor require its followers to trample on other people Faiths.

Even if there are fears that such situation can develop at a future time, safeguards in the constitution can be put in place to ensure that restrictions and other prohibits are not place on other Religions.

Nor should there be any fear that secular authority will fall under the influence or control of the spiritual authority as one can expect in an Islamic state. In Thailand, the secular concept in place now allows the government authority to interfere in religion. However, religion does not have any power to intervene in matters of state. The separation of state and religion is a one-sided affair. The state may interfere in religion to hinder or suppress it as can be seen in the case of the appointment of the supreme patriarch. It can also help religion, but the ultimate aim is to ensure its control over religion. The whole system can still remain status quo.

The relationship between Buddhism and the Thai government is such that, on one hand, the legitimacy of the government has to be reinforced by its acceptance from the religious authority. On the other hand, the survival of the religion depends on the protection from the secular authority. It is an intertwined porous situation in Thai society. This is unlike a communist system where religions itself are subjugated to supporting roles at best. To the communists, religions are just tools for the authority to use to achieve their required objectives. In a worst case scenario, religions can totally be dispensed with.

This example can be seen in Cambodia during the reign of the Pol Pot regime. At the beginning of their rule, there were around 40 thousand monks. By the time of their collapse, only around 3000 of these monks survive.  Buddhism there had to start picking up the pieces after that. The whole situation there also leaves a vacuum that allows Christian Evangelists the opportunity to move into the country with full force in the conversion of Cambodians to their Faith.

One should ensure that other religious beliefs are protected. But to preserve and ensure the dominant status of Buddhism in Thailand, one should also stop other religions from carrying out proselytizing activities to Buddhists as well. Thought Thailand do officially limits the numbers of preachers of other religions from proselytizing in the country, it has not try to enforce, stop or ban non-approved preachers from carrying out their activities of conversion with the Thais. This is one area the Thai authority should seriously look into.

If Buddhism is accepted as the state religion, changes should be made to the present Sangha Supreme Council structure to make it more
inclusive with appointments not just based on seniority and rank alone.  More power can also be delegated to this Council in the control on inter-denomination dispute arising out of or involving doctrinal issues and the punishment of wayward monks.

Thailand practices monoculturalism. There is no necessity for diversity of religious beliefs in the country. Diversity in religious beliefs brings along unnecessary problems to society as well. This can be seen in the southern part of Thailand. Enshrining Buddhism as the state religion in Thailand’s constitution will also send a clear message to other religions on where they stand in relation to Buddhism in Thailand.