China must lead the Buddhist World

Colombo, Sri Lanka -- The current visit of the Prime Minister of Sri Lanka Mr. Ranil Wickramasinghe to China draws attention to the strong Buddhist cultural ties between the two countries. 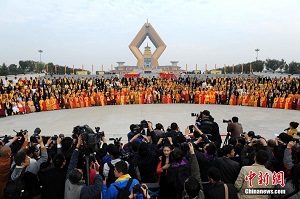 The historical relationship between China and Sri Lanka dates back to the early centuries of the Common era, and was based on shared religious and cultural values, The visit to Sri Lanka in the 5th, Century A.D. by the famous Chinese Buddhist monk and scholar, Fa Hsien, to study Buddhist scriptures is undoubtedly the most significant aspect of this relationship.

According to the Chinese text Biqiuni Zhuan, the biography of the bhikkhuni compiled by Shi Baochang in 526 AD, and the biography of Gunavarnam and Sanghavarnam, the Sinhala Buddhist nuns gave the second Upasampada, or higher ordination, to the Chinese nuns. According to another Chinese source, in 426 AD, eight Sinhala nuns arrived in Nanjing, the capital of the Liu Song dynasty (420–77 AD), on a merchant ship owned by a Sinhalese named Nandi. Consequently, three more nuns, headed by Tissara, arrived in Nanjing. Thus in the year 434, over three thousand nuns received their higher ordination for the second time in the presence of more than ten Sinhala nuns headed by Tissara at the Nanjing Temple in China. Therefore it can well be said that these Sinhala Bhikkhunis from the Abhayagiri Vihara in Anuradhapura, were responsible for the establishment of an Order of Buddhist Nuns in China.

In as much as two global religions Christianity and Islam are given leadership today by powerful countries based in the West and Middle East respectively, the time has come for the oldest of the three global religions namely Buddhism to be backed by a powerhouse to dispel the widely circulated myth that it is a weak religion sustained by relatively weaker countries in Asia despite Buddhism’s unmatched contributions to the sustaining of world peace, unqualified respect for the natural environment including reverence for the lives of all living beings and promotion of Ahimsa and non – violence as the basis of resolution of conflict.

The 27th General Conference of the World Fellowship of Buddhists that was held in Baoji, Shaanxi Province, China from the 16th – 18th October , 2014, being the first occasion a WFB Conference was held in mainland China, was a clear indication of the   new role that China has embarked upon. It was meant to send a strong message to the rest of the world that the China of the future will not only be a supplier of goods and services but also a source of enlightened thinking based on Buddhism.

Though there have been major upheavals from time to time in Chinese history e.g. the Great Proletarian Cultural Revolution ( 1966 – 1969), there is no gain saying that Buddhism is deeply rooted in China and is very much a part of the Chinese culture and civilization. Chinese Buddhism together with Confucius values will be a major export in the very near future. Using the country’s spectacular advancements in science and technology, Chinese Buddhism can be expected to  blend with modern technology and re- focus on social engagement within China leading to its emergence as a major force in China with the support of both Provincial Governments and local government i.e. Municipal authorities.

China’s new leadership is no longer doctrinaire Communist.   China’s President Xi Jinping has been quoted in the world press as saying that he believed China was losing its moral compass and therefore he wanted the ruling Communist Party to be more tolerant of traditional faiths in the hope these will help fill a vacuum created by the country’s breakneck growth and rush to get rich.

Xi, who was raised in Chairman Mao Tse Tung’s puritan China, is dismayed by what he sees as the country’s moral decline and growing obsession with money. Xi has expressed the hope that China’s “traditional cultures” or faiths – Confucianism, Buddhism and Taoism – will help fill a spiritual void that has allowed corruption to flourish.

The WFB Conference held in Baoji, Shaanxi Province and for the first time in mainland China, may well be considered as a  new starting point for both Provincial Governments and the Central Government of China to foster Buddhism and it will not be a surprise if the world were to see Buddhist missionaries from China emerging very soon to spread the teachings of the Buddha all over the world in a manner similar but more ethical than evangelists from USA and other western countries that are engaged in spreading Christianity in former colonies.

China must claim the leadership of the Buddhist world to better project its image and Chinese culture, which is rooted in Buddhism, and in addition to effectively counter aggressive foreign religious evangelism in many parts of the world.

Furthermore If there is any cultural and spiritual base that can unite Asia that is Buddhism primarily because the other two great Asian nations namely India (birthplace of Buddhism) and Japan are both heirs of a great Buddhist civilization that spread to the far corners of Asia long before the entry of foreign political and religious influences from the west.

On the day of the inauguration of the WFB Conference at the magnificent Famen Temple in Shaanxi Province i.e. October 16, 2014, China’s major television network CCTV broadcast a news item worldwide showing the grand opening ceremony and an interview with a Sri Lankan appealing to China to lead the Buddhist world and then quoting him as saying that if that were to happen Sri Lanka will fully support such a claim by China.