Kuala Lumpur, Malaysia -- In Nalanda University's website, it introduces the institution as thus: The University is inspired by and aspires to match the ancient Nalanda which was an undisputed seat of learning for 800 years till the twelfth century, CE. 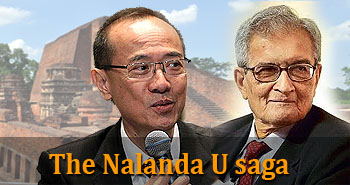 But not all is well with the reincarnation of this famous ancient university.

On November 23rd, Nobel laureate Prof Amartya Sen resigned from the governing board. He was the inaugural chairman of the Nalanda Mentor Group (NMG) which governed the establishment of Nalanda U.

Then two days later, George Yeo, a former foreign minister of Singapore who replaced Amartya Sen as the chancellor in July 2015, abruptly resigned. He cited "interference" in the "autonomy" of the university by the government of India as his reason for relinguishing his post.

The so called "interference" began when the governing board was reconstituted by President Pranab Mukherjee, who is Visitor of the university on November 21.

Yeo, along with other members of the governing board, wanted the Nalanda Act to be amended to broaden participation of other East Asian countries, apart from those which had contributed financially.
"For reasons not entirely clear to me, the government of India has decided to form the new governing board with immediate effect before the act is amended," Yeo said.

However, the government of India opines that the existing board is in contravention of the Act, passed in 2010.

It stipulated the governing board should be appointed within a year. But it has taken five years for the board to come into being.

On the fourth occasion, it was extended indefinitely. The NMG wanted to amend the Nalanda Act to giving itself the power to nominate members on the new board. The United Progressive Alliance (UPA) government led by then Prime Minister Manmohan Singh refused to push through the amendment.

After coming into office, the Modi government wrote to other contributing countries for representatives to the governing board, indicating they wanted to reconstitute it.

Buddhists generally have been critical of the original setup of the "new" Nalanda U.

In late January of 2011, when Vice-Chancellor Prof Gopa Sabharwal spoke about the emerging Nalanda University at a seminar organised by the Nalanda-Sriwijaya Centre at the National University of Singapore, she was questioned by Buddhists in the audience about the lack of involvement of Asian Buddhist scholars and educational institutions in the project.

Indeed, the university invited much criticism from followers of Tibetan Buddhism in both Asia and the West, who pointedly says that the exiled Tibetan spiritual leader the Dalai Lama, who lives in India, has not been assigned any role in the Nalanda University revival project.

In an article published in the Sri Lankan Guardian, the retired Indian Additional Cabinet Secretary B. Rahman has claimed that the Dalai Lama has been sidelined on the instigation of Singapore because of “misplaced deference to the sensitivities of China”.

When this question was posed to Prof Sen by Indian journalists, his response was that “being religiously active may not be the same as (being) an appropriate person for religious studies.”

On the contrary, the historic Nalanda University was essentially a Mahayana Buddhist Center of learning and had as its Directors (or Rectors) some of the learned Buddhist monks then existing.

Student monks studied four systems of Buddhist tenets: Two were subdivisions of the Sarvastivada school within Hinayana, i.e. Vaibhashika and Sautrantika. The other two – Chittamatra and Madhyamaka – were subdivisions within Mahayana

Among some of its famous abbots were: Shakyashribhadra and the scholar Dharmakirti (ca. 7th century), one of the Buddhist founders of Indian philosophical logic, as well as and one of the primary theorists of Buddhist atomism, taught at Nalanda. Both Mahayana Buddhism and Nalanda University influenced each other.

The difference in the scope and direction of the old and the new Nalanda University cannot be more stark in contrast. It is not wrong to say that the new setup glorifies the wisdom and validity of 'secularism' over and above the innate value and depth of the Indian spiritual heritage, which includes Buddhism.

This "modern Nalanda" has to be, perhaps the final insult foisted onto a great chapter of Buddhist history, where a secular place of learning has been set up to sit on top of a destroyed site of a reputed Buddhist tertiary institution.

Reviving the "Buddhist" Nalanda U

In reconstituting Nalanda U to live up to its historic background, the incoming NMG needs to secure the guidance and expertise of scholars in Buddhist studies. There is also a need to collaborate with existing institutions, especially those involved in mind studies.

There is no shortage of Buddhist scholars. If such expertise is lacking in Buddha's home country (i.e. India), then establish College or Academic Chairs, and invite existing Buddhist countries, such as Thailand, Sri Lanka, Vietnam and Japan to sponsor them.

There are also many wealthy Asians who would be willing to extend their assistance if requested. For instance, one of Asia's richest man, Mr Li Ka Shing has spent 1.5 billion Hongkong Dollars (about USD 195 mil) to build his Tsz Shan Monastery, in Tai Po, Hong Kong.

Even better, extend stakeholding to established Buddhist institutes - many of them located in the west - such as The Mind & Life Institute, Nalanda Institute for Contemplative Science, Nitartha Institute for Higher Buddhist Studies, Nan Tien Institute and Naropa University.

There is no shame in engaging with non-Asian Buddhists, as some of the true, core teachings of uncorrupted Buddha-Dharma are embraced more sincerely by western practitioners. More importantly, since the habit of inquiry is a habit of the western mind, this fits nicely with Buddhism's DNA of "free inquiry".

The marriage between Asian capital and global Buddhist intellect is the perfect recipe to spearhead Nalanda U's revival. As long as the Indian government is willing to facilitate this process, not only will it bring about the refluorishing of a once dead institute, India would endear itself to the Buddhist world. The political goodwill generated worldwide would be immense.

In this age and time, no one is suggesting the establishment of Buddhist scholasticism. This was the strategic excuse used by the previous NGM to adopt secularism as its prima facie to chart the revival of this ancient institution. Thankfully this has proven to be  a strategic mistake, devoid of substantial support from Buddhists and rightfully it should be discarded.

What needs to happen is this. The university's faculties and schools need to embrace bold and revolutionary visions, much like the wisdom and inspiration of Nalanda's most famous son, Nagarjuna. What has "Business Management" got to do with this esteemed institution? It really has no business to be there in the first place!

Instead let's look at the study of "paticca samupada" (interdependent origination) and apply its core teachings into the web of life, touching on diversity of species, the balance of nature and how all these impacts climate change.

Or establish schools to research on neurosciences, such as the impact of Internet of Things (IOT) on organic interactions, using Dharmakirti's philosophy i.e. the establishment of theory of logical validity and certainty grounded in causality. With India's abundance of software developers, this would be an ideal platform to propel the country's human capital to another level.

The resignation of the old NGM has presented an opportunity to right previous wrongs. We cannot denigrate Nalanda U with a secular uniform. That would be an abuse and insult of its rich academic heritage.

What we can do now is to suit it with garlands and costumes that befit its glorious past, and people it with illuminaries benched mark against its famous sons, such as Nagarjuna and Dharmakirti.

To accomplish less than the above would demean its true name, and be a disservice to Buddhism and a let down to the intellectual and spiritual development of generations to come.
TOP