A glimpse of Buddhism in ancient Bangladesh

It is a fact that Buddhism is the original religion of Bangladesh for more than 2000 years and has made deep impact on Bengali life culture and civilisation through centuries.

Dhaka, Bangladesh -- Did Lord Buddha visit Bengal during his life-time while he was preaching the Dhamma walking long distances on foot in Magadha (present-day Bihar state of India), Uttar Pradesh and his birth place Kapilavastu in Nepal? Legends and a latter-day Buddhist treatise named 'Bodhisattva Avadan Kalpalata' suggest that Buddha visited ancient Bengal probably along the river route of the Ganges. Historians, however, do not find authentic proof to support the view of his visit to this region. In any case Buddhism reached ancient Bangladesh shortly after his passing away. 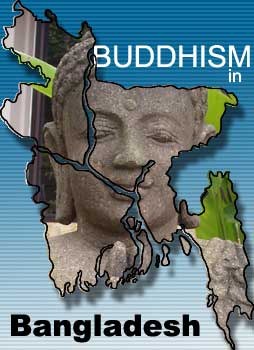 The reign of Emperor Asoka, the Great is the most remarkable period in Buddhist history. Under his royal patronage Buddhism took roots in the soil of the entire Indian sub-continent. He built 84,000 Stupas or monuments throughout India and inscribed Buddha's messages in rock edicts, hills and mountains which has defied time and exist till today. His emissaries preached the Dhamma in Sri Lanka to the south, Afghanistan, Egypt and some other countries to the west, Siam (Thailand) and Burma (Myanmar) to south-east.

Asoka's consecration to the throne took place 218 years after Buddha's passing away. Chinese pilgrim Fa Hien (359-415) during his visit to India in the Fifth Century came to ancient Bengal and found Buddhism in a flourishing condition through impact of Asoka's religious expedition. In the Seventh Century, the most outstanding traveller-pilgrim Hieun Tsang toured India for 16 years from 629 to 645 AD. While touring ancient Bengal he noted that Buddhism existed in Northern Bangladesh, Pundravardan and Mahastan, the first city of this ancient land. He visited Samatata region in 639 AD in present-day Comilla and recorded in his travel diary as having seen 30 Sangharams or monasteries here inhabited by 2000 monks of Thervada school.

In fact Buddhism is the original religion of Bangladesh for more than 2000 years and made deep impact on Bengali life, culture and civilisation through centuries in the midst of rise and fall of dynasties and kingdoms. Names of two devotees from Bengal, Dharmadatta and Rishinandan of Pundravardhan are inscribed in the entrance gate of Sanchi Stupa, constructed during Emperor Asoka's reign. The name 'Banga' appears in the stone inscription of Nagarjunikonda dated Fourth Century BC.

From the Fourth Century AD the Gupta kings of ancient Bengal who professed Hinduism and the Vaisnava cult showed exemplary tolerance to Buddhism. Fa Hien in his travel diary during Gupta rule wrote that Buddhism and Hinduism coexisted in an atmosphere of peace and tolerance. The Gupta period was marked in ancient Bengal's history for remarkable excellence in religion, philosophy, literature, poetry, sculpture and paintings.

In the Seventh Century, Bhikkhu Shilabhadra, born in present-day Comilla was the most outstanding monk who became the Principal of then the biggest University of world, Nalanda. Hieun Tsang studied Yogashastra under him for two years and paid glowing tributes to his Master as the most profound scholar and philosopher of ancient India. Acharya Chandragomin of this period was known as an outstanding grammarian who wrote grammar deviating from the traditional Sanskrit vocabulary of Panini.

The Seventh Century in ancient Bangladesh was marked by total social anarchy, lawlessness and feuds among sections of people. This period continuing for more than half a century is described as 'Matsyanyaya' which means big fishes eating small fishes, implying oppression of the weak by the strong. Under the circumstances, the people elected a local chieftain named Gopala as their King in Eighth Century to bring about order and discipline in the society. Gopala is the founder of the Pala Dynasty who professed Buddhism and created a new social order based on justice and equality among all people. Nearly 400 years of the Pala Rule (850-1250) witnessed the birth of a new civilisation.

The First King of the Pala Dynasty, Gopala established Buddhist monasteries in different parts of the country. Famous Buddhist Philosopher Acharya Santarakhshit visited Tibet and stayed there till 762 AD for reformation and regeneration of Buddhism. He is known as 'Pandita Bodhisattva' in Tibet. The Second Pala Emperor, Dharmapala was the founder of our 'Prajnaparamita Sutra' of Buddhism. He constructed 50 monasteries and founded the famous Vikramshila Vihara and Sompuri Vihara.

Buddhism created a rich culture and civilisation in ancient Bangladesh from Eighth to Thirteenth Centuries. The compassionate teachings of the Buddha swept away discrimination among men in the society and generated a new spirit of equality, fraternity and humanism. During the Pala age there was a movement against caste discrimination. Poet Sarahapad composed songs and poems against the futility of caste system. Quoting Gautama Buddha's teachings, a poem said : 'If among the Brahmins, some engaged themselves in education and learning and led pure lives and if some others remain engaged in killing and theft, will the two types of Brahmins be placed in the same category?'

Buddhism emerged as the dominant religion of the masses and exercised profound influence on the social, cultural and intellectual lives of the people. During this period big monasteries like Vikramshila, Somapuri, Agrapuri, Kanakastupa, Jagaddala, Odantapuri etc flourished as centres of learning on Buddhism as well as secular arts and sciences. The most significant of these monasteries was Sompuri Vihara whose massive ruins had been unearthed at Paharpur of Rajshahi district in northern part of Bangladesh by British archeologists. Unique in ancient temple architecture, this Mahavihara developed during Pala Dynasty from the Eighth to Eleventh Centuries and is described as the biggest monument south of the Himalayas. The architecture of this Vihara has influenced the style of monasteries in South East Asia up to Indonesia where monumental Borobudhur Temple of Java has been modelled after it.

Archaeological excavations at Mainamati in the Comilla district led to the discovery of Salvana Vihara which constitutes the ruins of the historic Kanakastupa Vihara witnessed by Hieun Tsang.

One of the greatest centres of Buddhism in the sub-continent after the decline of Nalanda was Pandita Vihara located somewhere in Chittagong as the major establishment of the Tantric Mahayana school. Atish Dipankar Srijanan, the outstanding saint and philosopher and another scholar monk, Tilopa or Tilopad of Chittagong who had preached Buddhism in Bhutan studied in this Vihara.

Buddhist scholars and saints exercised their influence far beyond the frontiers of Bangladesh. Atish Dipankar Srijanan of Ten-Eleventh Century AD was one of the most outstanding saints and scholars of the sub-continent and Principal of a number of big monasteries including Vikramshila Vihara. He was born in Bajrayogini village of Vikrampur, not far from the city of Dhaka. He visited Tibet at the invitation of its King for revival of Buddhism and lived there for 13 years until his death at the age of 73.

He wrote more than 100 religious and philosophical books on Buddhism which are preserved in ancient temples of Tibet. He is still worshipped in Tibet, China, Mongolia and northern Asian countries as the incarnation of Lord Buddha.

The period of Buddhist rule in ancient Bangladesh was marked by remarkable development in the style of architecture, arts and sculpture. The massive monasteries in Paharpur, Mainamati and Mahastangarh were built in Bengal style of architecture. Terracotta pieces in the walls exemplify development of secular arts reflecting life, nature and social scene of those days.

Sculptors chiselled out images of Buddha, Bodhisattvas and other deities in stone, bronze and other metals which are specimens of intricate style of workmanship. Numerous Buddha images in meditation, mainly in the Bhumisparsa Mudra or earth-touching attitude with Buddha's right hand touching the Mother Earth as witness to his attainment of Supreme Enlightenment in the face of Mara's onslaught were unearthed from beneath the soil. Among the Mahayana Tantric gods and goddesses, Avalokiteswar in particular inspired the artists who depicted him as the presiding Bodhisattva of the time looking upon mankind with infinite compassion and vowing not to seek Niruana for himself until all human beings are liberated from the bondage of sufferings.

Bengali language owes its origin to the work of Buddhist monks from the crust of prevailing Prakrit and Apabrahmsa language. In the year 1906 some ancient manuscripts lying buried in obscure chambers of monasteries in Nepal were discovered. They were found to be lyrics and songs written in an ancient form of Bengal language by monks known as 'Siddhacharyas'. Sitting in the monasteries of ancient Bengal from 10th to 13th Centuries, they created poetry in lyrical verses in a language spoken by the common folk which has come to be recognised as first ever germination of Bengali language. These poems known as 'Bouddha Gan O Doha' (Buddhist songs and lyrics), the first ever in the history of Bengali literature were unique as lyrical verses expressing Buddhist thoughts as well as the society and nature.

Continuous cultivation of this language was carried out for several centuries till Buddhist lyrics found logical fulfilment in the composition of 'Vaisnava Padabali'.

The final disappearance of Buddhism in ancient Bangladesh is mainly attributed to the degeneration of Buddhism into obscure Tantric cults and also emergence of religious and social conservatism in the subsequent Sena Rule. At that declining stage of Buddhism, the Senas supporting the Brahminical doctrines came from south India and destroyed the social structure founded on equality of all people in the Pala Age. A sizeable number of Buddhist monks fled to Nepal and Tibet with their manuscripts and religious books while some others continued their existence here under various camouflages.

Subsequently a group of orthodox Buddhists from Magadha, Vajji and Vaishali of North India migrated to the Eastern regions to escape the rising tide of militant Brahminism there in the 13th-14th Century. They first came to Assam and then continued long journey to reach Chittagong where they found safe shelter merging with surviving Buddhists of ancient Bengal amidst geographical landscape of sea on one side and ranges of hills on the other. The newly-settled immigrants from Magadha lived for about two centuries under Arakanese rule (1459 to 1666) when they adopted Theravada Buddhism. These Buddhists under ethnic nomenclature as Barua still uphold the ancient tradition and have taken advantage of English education in early 20th century during nearly 200 years of British colonial rule. They constitute a highly-educated middle class segment. Professor Benimadhav Barua (1888-1948) of the Calcutta University was the first D.Litt of the Indian sub-continent and Asia in 1917 from the London University.

The tribal Buddhists of the Chittagong Hill Tracts are believed to be belonging to Burmese-Tibetian races with their own distinctive culture. Bangladesh is rooted to an age-old Buddhist culture and civilisation which is an integral part of national heritage of Bangladesh.