The art of giving

Kathmandu, Nepal -- I haven’t celebrated Dasain in the almost 17 years since my husband’s death. Since then I pretty much keep low on social events because initially I couldn’t cope with the responsibilities of being single. Now, my two girls are married and do their own things but we do sit together to eat a meal as a family. Also since I’m a practising Buddhist, I do not believe in animal sacrifice. 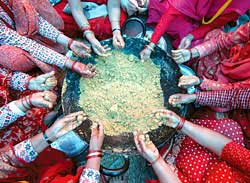 Initially as a Hindu widow, I fled from its ritualistic demands because you are expected to fulfil a certain role. You can’t be fighting for feminist principles in such personal family and social situations. I respect all religions and if there had been teachers who could educate me more on Hindu philosophy I may have stayed with it. However, after my husband’s death I realised what it was like not to be in the mainstream.

If widowhood happens at a ripe old age so what if they get you a white sari or yellow tika but when it happens at 35 and you have to look after three children and hold your own? It strips you not only of colours but of your very dignity and esteem. So luckily I found solace in Buddhism. I chose to study and educate myself and I luckily connected with my spiritual teachers. It felt like I had finally come home.

I created a space for myself that was more conducive to my being and my work and this supported me. At the same time, if you go with clarity and understanding you can shield yourself. What worth are ritual practices which insult your dignity and self esteem and are not at all compassionate and tolerant?

Our class system is very defined. I used to see my father feed many hungry people during Dasains past. We gave through our cultural and religious practices. Traditionally philanthropy was ingrained in the institution of religion but with modernisation we disengaged ourselves from that and didn’t replace it with something else. There is no more pressure to give. That is why education and awareness of philanthropy is very important. All of us receive so much from our communities, we have to find a way to give back as well.

Perhaps there are not many who give but there are some and I’d like to think that the numbers are growing.

When we look back at the old Nepal of our forefathers we see philanthropy was ingrained: people built satals, temples, roads, water taps. Today, people who are privileged tend to become self-indulgent. Globalisation has turned us into individual consumers and this can literally eat up all wandering beings who are have lost their traditional moorings but have not yet been inducted into modern philanthropy. This is why the organisation Tewa was begun—to promote philanthropy for social justice and the empowerment of Nepali women.

At a time when there are so many people displaced by the conflict, if each and every one of us extended support to one family from the displaced community and helped them have a better celebration this Dasain it would mean all Nepalis could be taken care of.

It is the same in society as it is in politics: you can wake up someone who is asleep but you can’t wake up someone who is pretending to be asleep. Each of us must lead by example. It begins and ends with every individual Nepali and that is how brick by brick we can together build a self-reliant, just and equitable society. l