The true spirit of Asalaha Puja

Bangkok, Thailand -- Asalaha Puja Day, according to the traditions of Theravada Buddhism, is the anniversary of Lord Buddha's first sermon, known as the Turning of the Wheel of the Dharma. He delivered this sermon to the five ascetics who were his attendants during his quest for enlightenment. 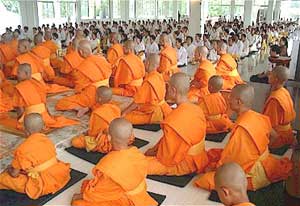 In this sermon, the Lord Buddha expounded on the primary founding principle of Buddhist practice and the hallmarks of what he had discovered _ the Four Noble Truths, and the principle of practice that leads to it, known as the Middle Way.

As a result, the leader of the five ascetics, Kondanya, was enlightened, and declared himself a disciple of the Buddha. Traditionally, he is honoured as the first disciple of Lord Buddha and the first monk ordained in Buddhism. The others were converted to the Buddhist faith and subsequently enlightened and ordained in the same manner.

According to this legend, the first sermon is recognised as the point at which the three components of the Triple Gem, comprising the ultimate entity of worship for Buddhists _ the Buddha, the Dharma, and the Sangha _ were complete.

In Theravada tradition, it is taken for granted that this event occurred on the full moon day of the month Asalaha, according to the Indian lunar calendar, which falls during June or July. The following day is taken as the beginning of the Buddhist Lent, a period of three months in the rainy season when monks and nuns are allowed to take their retreat.

The taking of Lent in the rainy season contradicts one of the attributes of the Dharma, which is akalika, meaning "independent from time". In the book of Monastic Code, the Vinaya clearly shows that the rain retreat is entirely optional.

In fact, it was not originally initiated by the Lord Buddha. Rather, the tradition was formed in response to criticism by followers of the Jain religion, who believed that religious mendicants must avoid travelling during the rainy season so as not to tread upon small seedlings growing in the ground. In Jainism, physical actions are the main sources of karma, and non-violence is an essential component of a devout life; trampling the sprouts was considered an act of violence causing a painful end of life.

In Thailand, however, entering a rain retreat is seen as a serious undertaking and mandatory for every monk. The reason behind this belief was probably because few Thai people take a life-long monastic vow, and monkhood is seen as a form of temporary spiritual training or education. The retreat tradition mandates a serious undertaking, so that the newly ordained will get the maximum amount of spiritual growth and training out of the experience. Monks who travel overnight during the rain retreat are often frowned upon.

In early Buddhism, the rain retreat tradition consolidated the Buddhist community. Monks and nuns who lived the homeless life were able to strengthen their relationships to one another. It also provided a forum for exchanging spiritual experiences. Senior monks and nuns were seen as fathers and mothers to their students, thus fostering the Sangha as a family in which members act as brothers and sisters. Each member of the Sangha is responsible for the physical and spiritual growth of the others. Community care was the heart and soul of the Sangha.

A rainy retreat is usually concluded with a day of admonition, or pavarana, when each member of the community offers themselves to receive advice from others. Each also has the right to admonish his fellow members of the community, regardless of their seniority.

However, in Thailand, this tradition has been reduced to a mere relic of its original form. The feudalistic hierarchy imposed by the current Ecclesiastical Act of 2505 BE (1962 AD) uprooted the ability for monks and nuns to critique their superiors. The abbot and the senior monks, especially those who are appointed within the bureaucratic ranking system, are practically exempt from the pavarana.

Following the conclusion of the retreat, a special offering called the Kathina Offering is conducted. Kathina is the name for a robe specially donated by a lay disciple out of his or her good will. The offering is made without any request or solicitation by the community. The community, in response to the offering, will allocate the robe to the neediest member of the monastic community. In another words, the community offers the robe as an act of care and concern for their fellows.

On the one hand, tradition points to the fact that in the past Buddhists in India formed a strong community rooted in respect for the Dharma. On the other hand, it shows the flexibility and adaptability of a growing religion that complied with a cultural environment that was somewhat alien to its original spiritual philosophy. Sadly, the true spirit of the Sangha has been lost in Thai Buddhism where the word sangha means merely an individual monk, and all the related community ceremonies such as patimokkha, pavarana and the kathina offering are simply conducted as rituals.

There is no better way to celebrate the Asalaha Puja rain retreat than to bring the spirit of caring back to the Buddhist community. Let us remember and share the comity rooted in the Dharma of Compassion so that, in turn, we Buddhists can promote peace and harmony during these uncertain times of political upheaval and scandal.